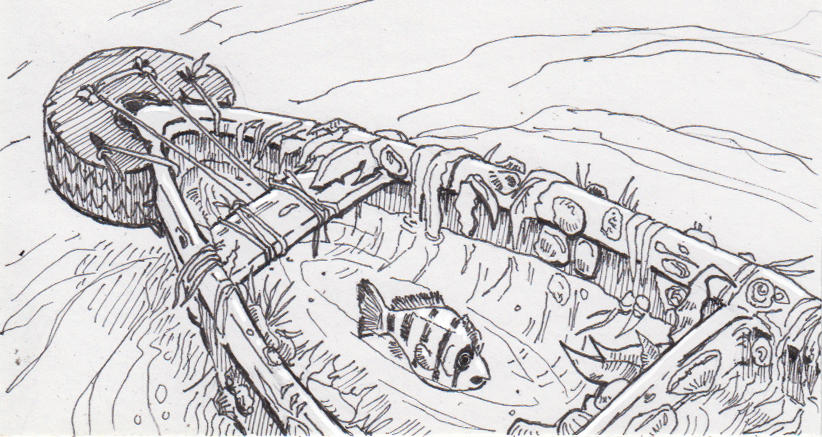 Why would a fish need a boat? To travel the ocean, of course. It may seem slightly counterintuitive that creatures that live in the ocean might need some kind of flotation device to travel said ocean, but it’s a scenario that’s been playing out for the last six years across the Pacific. Boats, floats, logs and other debris that was swept out to see in the 2011 tsunami off the coast of Japan have been slowly arriving on foreign shores, complete with passengers ranging from shipworms to Japanese barred knifejaw fish (Oplegnathus fasciatus). It’s an unprecedented event, as these creatures are traveling farther, and in greater numbers, than ever before. This uncertainty has biologists worried, as many of these new species may decide to take up residence, rather than simply stop by for a visit.

The fact that the 2011 tsunami pulled debris out into the Pacific ocean is no surprise. Tsunamis, hurricanes and even major storms have long been known to occasionally trap organisms on floating debris before sending them on long journeys. Historically, these unintentional sailors have been stuck on natural materials that would rot or be consumed by things like shipworms along the way, limiting the distance any creature could successfully travel. Of course, we also know that creatures have survived such voyages in the past, often with important repercussions.

The current batch of travelers is experiencing something that humans have known for some time. Thanks to technological developments, the world is effectively getting smaller. Whereas coastal crustaceans, fish and sea stars are generally fenced in to their local habitats by differences in water temperature, salinity, predators and of course, personal mobility, debris made from durable, synthetic materials made long-distance travel possible for the first time. Fiberglass boat hulls filled with water acted like protective shells around fish before arriving on the Washington coast. Polystyrene floats carried oysters to California. The arrivals are slowing down finally, but at least 634 objects have survived the trip, with about 65 percent of those carrying potentially invasive species.

With nearly 300 species having arrived on the shore from Alaska to California, there’s a lot of worry about how well they’ll “fit in.” Some, like the Northern Pacific sea star (Asterias amurensis) is already known as an invasive species in other parts of the world. Others raise concerns because they’ve already demonstrated their survivability in making the trip, such as the Bryozoan larvae that only live for a week, and thus must represent many generations of successful reproduction in foreign waters. With the amount of variety that has been found, researchers worry that there’s even more that we’re missing, and that we may soon see dramatic conflicts in shoreline ecosystems. Even if none of these organisms don’t disrupt ecologies now, the next tsunami is sure to send another wave (ahem) of refugees the ever increasing supply of plastic, foam and fiberglass objects being dumped in the oceans.

Not every arrival is starting from scratch though. The slipper snail (Crepidula onyx) was originally native to the eastern shores of the Pacific before it was artificially transported to the coast of Japan. Having had a stint there as an invasive species, it seems that a few individuals have returned to their homeland, hopefully without making too much more trouble for the locals.