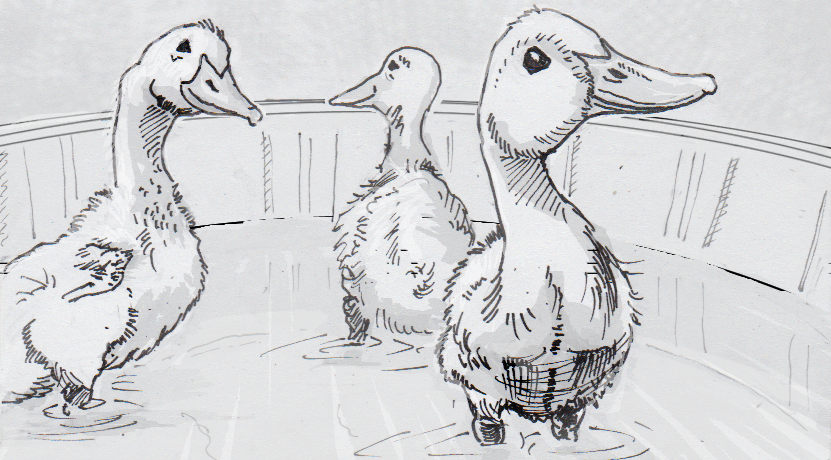 For the past weekend, we’ve been duckling-sitting. The three two-week-old Pekin (or Long Island) ducks are solidly in their cute-yellow-feathers phase, although they seem to have the endless appetite of a human teenager. As we cycled the ducks in and out of their cage and wading pool that we were lent for their visit, a number of questions naturally arose about what they were up to and what they’d become as they grew up.

Pekin ducks were originally domesticated in China over 1000 years ago. Mallards living around Nanjing to take advantage of spilled grains were eventually cultivated for their eggs and meat. Over that time, selective breeding erased the Mallards’ trademark green, gray and brown coloring, leaving the adult Pekin with white plumage and orange bills and feet. Males and females have very few visual differences, save drakes’ additional curly feathers on their tail. Breeding has also pushed their bodies’ growth to outpace their wings, and adults are generally too heavy to actually fly, which only reinforces their domestication, both for farming and as pets.

Doting on the ducklings 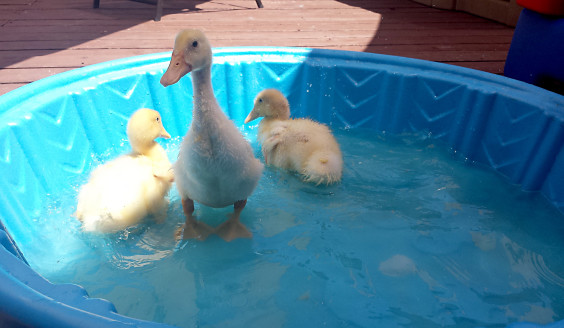 As ducklings, Pekin ducks are mostly precocial, meaning they hatch with a fair degree of self-sufficiency (versus, say human babies which are on the “altricial” end of the spectrum.) So even two weeks ago, these three ducklings hatched with the ability to walk and look for food. However, as incubated ducks, they had no way to be exposed to their mother’s preening oil, and so we’ve had to closely monitor their visits to the wading pool. While the pool obviously lacks predators, there’s a concern that without the oil to start waterproofing their feathers, they can become waterlogged and cold. So when they’re not (quite happily) splashing around, or exploring our porch, they’re staying warm under a heat lamp.

Our visiting trio have made pretty decent house guests. The breed is very friendly with humans, showing a great deal of interest in our presence and activities, even when we’re not filling their feed bowl. As incubated ducklings, they imprinted on their human caretakers (in this case, my kindergartner’s teacher), but they didn’t take long to warm up to us as a surrogate flock for the weekend. I’m sure we’ll miss their soft peeps after they leave, although I can’t say the same thing about all the clean-up required, even when they try to help.