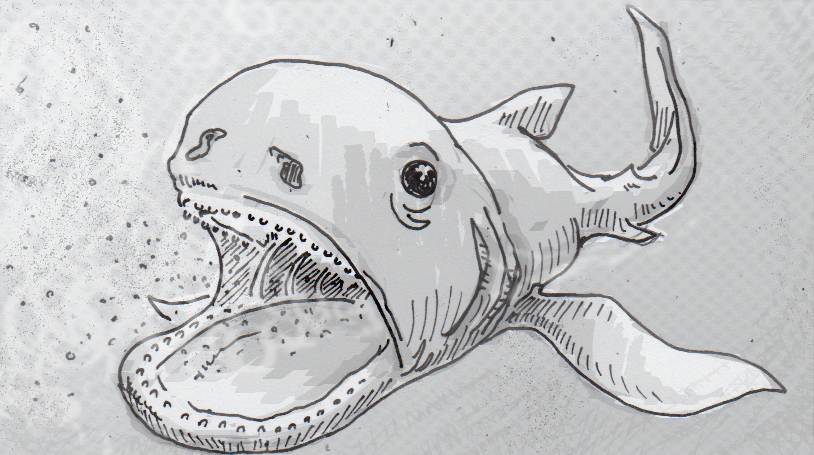 A brief history of sharks’ many forays into filter-feeding

Sharks, as we all know, are flesh-gobbling hunters with fascinatingly intense teeth. Except when they’re not, such as in the case of the largest shark (and fish) in the world, the whale shark (Rhincodon typus). This shark, and a small batch of compatriots, have given up their chomping and slashing of larger prey to become filter feeders, swallowing plankton to fill their strikingly large bellies instead. As much as this clashes with popular notions of sharks, it’s actually evolved repeatedly in both sharks and rays, even as far back as the Cretaceous period.

All of these filter-feeding fish feed with a similar methodology. They open their large mouths to suck in water hopefully filled with plankton, similar to filter-feeding whales like a blue whale. Instead of baleen, the whale, basking and megamouth sharks rely on specialized gill-structures, which catch the plankton in the animal’s mouth as the water is expelled. Despite the similarity in function, these structures are cases of convergent evolution— each lineage evolved their filter-feeding independently, rather than from a shared ancestor. Perhaps due to their closer relations to their more carnivorous ancestors, each shark has also retained some of its trademark teeth, although they’re drastically reduced in size compared to their kin.

Trail of the tiny teeth

Thanks to those tiny teeth, ancient cases of filter-feeders have been identified. The recently described Pseudomegachasma comanchensis, or “Pseduo-Megamouth,” was named for the striking resemblance to the modern, deep-water species. The tiny teeth are key to the discovery, especially since cartilaginous animals don’t leave behind many other good fossils. Even though this species from around 99 million years ago obviously predates the megamouth sharks (Megachasma pelagios) of today, we have no evidence they’re related. There are actually no species of filter-feeding sharks in the fossil record from 50 to 91 million years ago, leaving a confusing gap in what has otherwise been a successful enough niche that it’s been filled over and over throughout the ages.