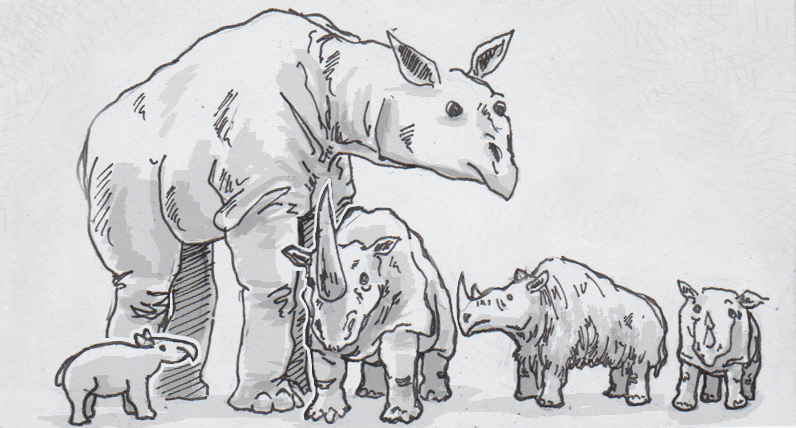 A brief tour of the rhino family tree

The popular image of a rhino is generally pretty limited. It’s a big gray mammal with horns that make it a target for poachers, and that’s that, right? Well, not really. Looking back down the family tree, you find a surprising variety of shapes and sizes in the perissodactyl order, including a time when rhinos were spread across Africa, Asia and Europe, filling multiple ecological niches. The signature horned nose is actually one of the later additions to the lineage, because what really counts is the odd number of toes on the hind legs.

Looking from the head down to their toes

The toe count is actually the common features of all perissodactyls, including cousins horses, zebras, and tapirs. But this root ancestor that dates back to the Eocene period, 55 million years ago, didn’t otherwise look much like a rhino. Instead, the modern tapir is a better analog, living in the warm, wet forests of the time. While tapirs obviously continued, rhinos did start to carve out their own shape as the climate cooled in the Oligocene period, although that still didn’t really look like a modern rhino.

Instead, the headlining Oligocene rhino-relative was the 16-foot-tall Paraceratherium. With long, relatively narrow legs and a decent neck, this hornless herbivore strode across the grasslands of Asia and Africa, probably eating from tall trees like a giraffe. Their large size probably helped with access to food, but it didn’t seem to protect them from predation, as many fossils have been found with crocodilian bite damage. It also didn’t protect them from upstarts, as elephants likely started challenging them for the “massive herbivore” slot in various environments.

Variety in form and horn

The Miocene period, 23 million years ago, was the end of the road Paraceratherium but not for the larger rhino family. Europe had an impressive variety of species of different types and sizes, with some resembling hippos and others looking like modern rhinos reimagined by 12-year-olds. The latter group includes Elasmotherium, who stood nearly 10 feet tall at the shoulder. Unfortunately, the horns, made primarily from keratin (like your fingernails,) don’t fossilize and so we don’t have an intact example of Elasmotherium’s single horn, but comparisons of the wide, deep point of attachment to other species indicates that it would have been over 3 feet tall.

Wool coats from Tibet spread were the cold new thing

Giant horns weren’t much help with the Pliocene Ice Age 5 million years ago, which paved the way for Woolly rhinos’ (freezing) day in the sun. These rhinos looked much like today’s African species, but their origins in the mountains of Tibet equipped them with long, thick coats of hair. As the climate cooled, more territory at lower altitudes suited this specialization, and woolly rhinos expanded their range. In the end, further shifts in the climate coupled with predation probably played a large roles in these animals’ extinction, as recently as 10,000 years ago.

The prime predator by that point, and today, was humans. While the woolly rhino was hunted for subsistence, as suggested by bones found with bite and tool marks, today’s rhinos are being threatened only for their horns. Of the remaining five species of rhino still alive, the Indian rhinoceros, which has a relatively stubby horn on males only, are hanging on. On the other end of the spectrum, those of us alive today will surely have the dubious honor of witnessing the extinction of the Northern White Rhino. And while there’s still hope for some other modern species, as well as many efforts being made to protect them from senseless poaching, it’s safe to say that the world is well past “peak rhino.” We can’t say they didn’t have a good run of the place though.

Source: The story of rhinos and how they conquered the world by Chris Baraniuk, BBC Earth