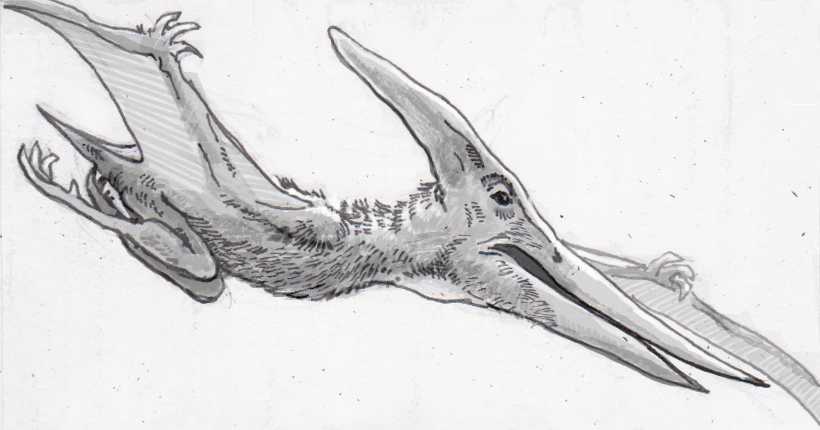 It’s hard to study extinct animals with no surviving descendants, which is why researchers have had to use modern quail skeletons to prove that pterosaurs didn’t move like bats. It sounds silly, but is also somewhat appropriate for animals that are often confused with dinosaurs and were also strongly compared to flying mammals when their fossils were first discovered. Because pterosaurs also flew on wings made of skin that extended from the animals’ torsos to their specialized fingers, the assumption was that their hind legs would also splay out as if they were a bat. That idea may be falling out of favor though, and a recent study with modern quail corpses may narrow the range of possible poses even further.

Which poses were possible?

With very rare exceptions, fossils usually only preserve skeletal anatomy in an animal. We can learn a lot from bones alone, as they will generally be marked by specific textures where muscle once attached, as well as stress damage from the pull of strong tendons. Of course, not all wear and tear adds useful information to a fossil, and flattened or broken bones make it harder to know how a skeleton once interacted with softer tissues like muscles, tendons and ligaments. Just because a thigh bone could appear to fit in a hip socket in specific orientation doesn’t necessarily mean that we can be sure the animal actually held itself in that posture when it was alive.

To see just how much of a difference soft tissue can make, Armita Manafzadeh from the Brown University dissected and analyzed the femurs and hips of modern quails. She found that a few ligaments in particular greatly reduced the range of movement in the bird’s legs, ruling out close to 95% of the leg positions that the bones alone could adopt. Among those positions are the bat-like leg poses seen in early reconstructions of pterosaurs, suggesting that pterosaurs never flew this way. This doesn’t take a huge stretch of the imagination, since while bats and pterosaurs could have independently evolved this posture in a case of convergent evolution, they’re so distantly related from each other there’s no way one animal inherited the pose from the other.

How close are these connections?

On the other hand, pterosaurs aren’t closely related to just about any animal alive today, including the quail used in this study. Pterosaurs weren’t birds or even dinosaurs, and so they wouldn’t have a direct connection to modern bird anatomy, especially as far as flight anatomy is concerned. Instead, this research is relying on the idea of phylogenic bracketing, in which a trait is inferred in one species by looking for shared traits in nearby branches of their family tree. Since the key ligaments that limited leg movement are similar in both birds and modern reptiles like lizards, it’s somewhat fair to assume that pterosaurs would have inherited similar anatomy from these groups’ last shared ancestor. Of course, reptiles nor birds flew with elongated pinkies either or developed a pteroid, so there’s also a chance that pterosaurs had time to evolved their own, specialized version of a more flexible ligament.

At the very least, these more bird-like postures don’t necessarily conflict with some of the best evidence we have about pterosaur legs— their trackways. Many trace fossils of pterosaur footprints have been found, which has helped build the hypothesis that larger pterosaurs used their legs and arms to hop, jump and catapult themselves into the air. What their legs did once airborne may need to be debated a bit further though.