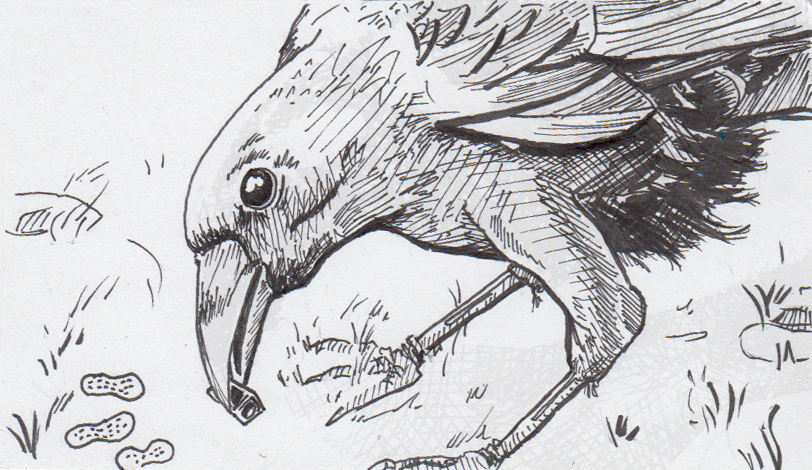 A Murder of Hungry, Appreciative Neighbors

Crows are known to be clever problem solvers, but apparently they’re also appreciative. Over the last few years, Gabi Mann and her mother have been cultivating a relationship with their neighborhood crows that goes well beyond bread crumbs in the park.

It started when Gabi was younger, spilling crumbs and snacks around their house on a regular basis. Over time, all these crumbs started attracting a devoted audience of crows, to the point where they’d line up in advance of Gabi’s return from school in hopes of getting leftovers from her lunch. Once her mother and brother started actively contributing to these ‘meals,’ the feedings became more formalized in the form of a daily ritual in the family’s back yard.

The crows escalated their response in kind, calling out from the power lines in anticipation each day. But more charmingly, they also started bringing trinkets to leave in place of the eaten food. Small shiny objects kept turning up, including shiny rocks, earrings, screws, and even a Lego brick. Anything a crow could easily fly with (and had no real use for) seemed to be a possible gift to Gabi and her family.

This isn’t the first time crows have been known to bring offerings to their regular food providers, although often the gifts are skewed more towards a crow’s own taste— dead animals and treats that crows would give each other during courtship (further solidifying the idea that these trinkets are seen as offerings for the recipients’ favor). But Gabi’s gift collection has generally been more hygienic, and she records the date of each item as she organizes them in a large bead box.

So while this behavior isn’t unique, there is a personal feeling to it. One afternoon, Gabi’s mother was in the neighborhood and dropped the lens cap to her camera. One of the crows must have been watching, as when she returned home the lens cap was waiting for her on the bird bath, delivered (and cleaned!) by one of the more active gift-givers.

Source: The girl who gets gifts from birds by Katy Sewall, BBC News Magazine