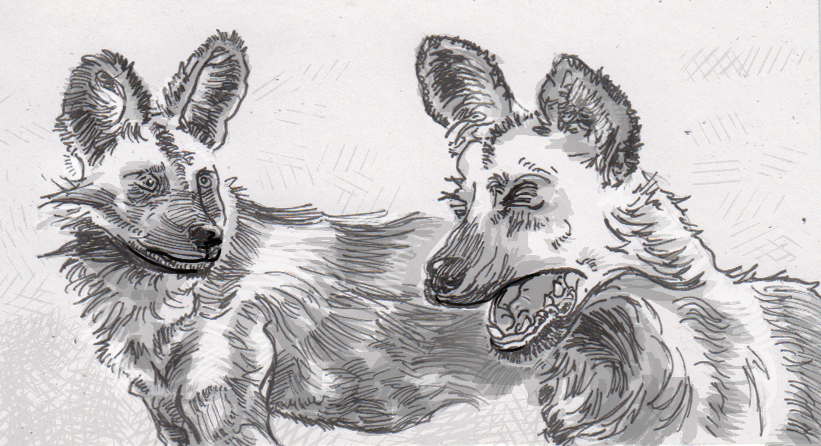 When it’s time for dinner in my household, my family often relies on sort of volume- and pitched-based form of democracy. Suggestions about the menu get offered, at which point my kids “vote” on their options with various groans, whines and shouts until we end up eating macaroni or pizza again. It’s not a perfect system, but it gets us all fed. That said, I’m now thinking that we should look to African wild dogs for a more civilized form of decision making, because all they have to do to vote on dinner is sneeze.

To be clear, African wild dogs (Lycaon pictus) do have hierarchies like many other social animals, with an alpha pair leading the group. That pair’s primary privilege is that they are allowed to mate while other dog play support roles to ensure the success of the group’s pups. These groups vary in size, sometimes consisting of only two dogs, but other times swelling to 27 individuals. These groups need to have a degree of social cohesion though, or else they will split up and look for more compatible peers elsewhere.

Understandably, coordinating a hunt can be a test of how well a group works together. Since the dogs don’t want to go after game like gazelles or wildebeest alone, a hungry dog will need to rally support from other pack members. This behavior pattern isn’t unusual on its own, but the way the wild dogs voiced their preferences did catch researchers’ attention. 68 rallies from five packs were analyzed, and the critical signal to other dogs turned out to be intentional sneezes. As more wild dogs decide to head out, they’ll start sneezing more frequently until the agreement is reached to start hunting.

Not a complete consensus

Once researchers confirmed that sneezes really were the way the dogs voted, other patterns emerged. If the average dog was hungry, it would usually need at least 10 supportive sneezes before a hunting party would be formed. However, if a more dominant animal, like the alpha pair sneezed, that threshold dropped and other dogs would agree to start hunting sooner. This doesn’t mean the alpha dogs are total dictators though, as they’d have to participate in hunts they didn’t apparently didn’t support as long as the pro-hunting dogs had enough votes to go.

While these patterns seem to point towards a sneeze-based voting system, the researchers caution that it’s not totally settled, since we can’t know what’s in the wild dogs’ heads. That said, it’s not a huge stretch that they really are voicing their opinion this way. The sneezes are somewhat similar to vocalizations other canids make to show alarm, but these dogs were notably calm while sneezing. They also didn’t seem to provoke stress responses in other dogs as they sneezed, indicating that these sounds weren’t another alarm call. If confirmed, African wild dogs would not be the only animal known to use so-called quorum behavior to build support for an activity. Creatures like gorillas and even dancing honeybees need to lobby their peers for support, and so even if a sneeze seems unusual to us, the basic concept should be well within the dogs’ abilities.

My third grader asked: Does being hungry make the dogs sneeze? Do they have to sneeze all in a row for it to count? Do they count to ten sneezes then go?

The only physiological mechanism suggested by the observing biologists was that the dogs may be clearing their nasal passages in preparation for a big run. Humans are known to sneeze for non-nasal reasons, but having a full stomach, not an empty one, is the only connection to these dogs.

The dogs don’t seem to need to sneeze in rapid succession. In fact, the researchers weren’t immediately sure of the connection, only noticing a lot of unexpected sneezing happening before hunts.

Finally, domestic dogs can keep track of quantities up to four or five, so it’s unlikely the wild dogs are really doing a strict vote count up to ten.