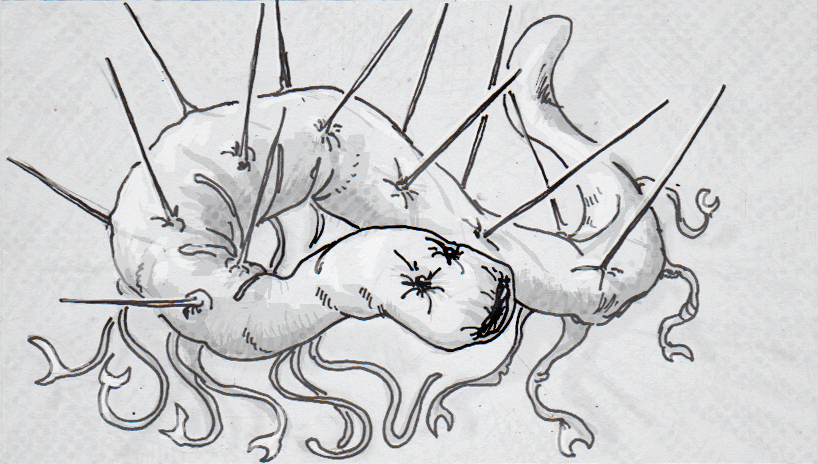 After 30 years, we have Hallucigenia’s head

A fossil of a tiny worm from the Cambrian Period has finally been deciphered. The creature, called Hallucigenia, was first discovered over 30 years ago, it has been incredibly difficult to understand, as it’s body, limbs and head seemed to point in every direction at once, making identifying relevant anatomy, much less behaviors or ecology, very difficult.

Hallucigenia can be described as a 0.5 to 3.5 cm long tube, with seven or eight tentacle like structures distributed in pairs down the length of the body. Each tentacle ended in some sort of bifurcated stump, most likely a claw. Opposite each ‘tentacle’ were a set rigid spines, just about equal in length to their complementary tentacle. Early specimens left many questions, including which parts were the legs, head, arms, etc.

Locking down the legs

Quadrupeds, and to an extent, vertebrates, provide a much clearer body plan for us to follow. The head, digestive-tract and limbs formula hasn’t needed to change very much for millions of years. But Hallucigenia didn’t really follow that template. Early examinations assumed the spines were used as legs to get around. Fortunately, more specimens were found that eventually flipped that hypothesis, with the tentacles being used for mobility. Which direction the worm was walking, however, was still a question as the head was still a bit of a mystery.

Finally, new data seems to have finally put the pieces together. One end of the worm was found to have tiny, basic eyes, as well as internal spines that likely lined the inner mouth and throat of Hallucigenia. Some semblance of a digestive tract was also found, allowing some guesses as to the diet of the ancient worm. It was likely some kind of suction feeder, with the inner spines intended to help catch and force food down the digestive tract, a bit like the papillae in a camel’s mouth. What’s more, this anatomy also fits with some modern relatives of Hallucigenia, such as a velvet worm. Now that we’ve figured out which end was up, Hallucigenia isn’t quite as bizarre as once believed. But only slightly.

Source: Scientists Finally Decide Which Bit of This Weird Animal is the Head by Ed Yong, Not Exactly Rocket Science