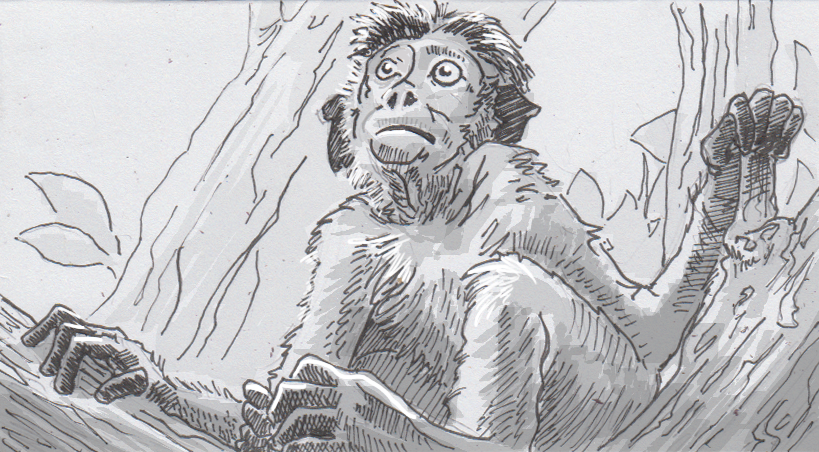 While it’s second nature for most of us to follow someone else’s gaze to see what they’re looking at, it’s a response that changes throughout our lives. Infants don’t do this when they’re first born, and even after they start to follow another person’s gaze, they might be a year old by the time they reverse the concept by pointing to direct others’ attention. Kids are usually quite sensitive to where other people, hopefully their parents or teachers, are looking, but as we age this habit drops off. All this appears to be hard wired in us to a degree, because monkeys have been found to follow the same patterns in their life-cycles as well.

To test this concept, researchers approached different rhesus monkeys (Macaca mulatta) in the wild, and then tried to get their attention by clapping, whistling or shouting “monkey monkey!” In addition to making for an amazing methodology section of their published research, these sounds got a rhesus monkey’s attention, at which point the noisy researcher would look straight up into the sky, clearly looking at something that just had to be shared with the smaller primate. A second researcher watched and recorded the monkey’s response, noting the test subject’s age and attitude about the interaction. Like humans, younger monkey’s were the most responsive to the human’s apparent interest in the sky, while older monkeys occasionally didn’t care at all. Also like (most) humans, the monkey’s seemed to regard the lack of stimuli in the sky to be a let down, and didn’t trust the researcher later on.

This pattern has implication for how social animals like us develop their communication skills as they age. It also dovetails with another rhesus study looking at age-related interests. Once again, younger monkeys were found to show interest in a wide range of stimuli, while older monkeys seemed to narrow their range of interests.

Older simians set in their ways

The study started with a set of toys for different monkeys. Two out of three objects clearly held snacks inside, while the third was only eye-candy. After a quick inspection of each object, adult monkeys only had time for the potential snacks, while younger monkeys showed interest in playing with all three objects. A second phase of the test showed monkeys photos of baby monkeys, monkeys they knew, or unknown monkeys. The older monkeys basically fixated on their known social circle, ignoring other faces. This pattern held up with sounds and smells too. It appears that while socialization is still important to older monkeys, they only want to try to hang out with their closest friends.

It would be difficult to combine these two studies, unless a very dedicated set of researchers wanted to do the hard work necessary to really become a trusted grooming partner and confidant for some rhesus monkeys as they grew up. Presumably, when the time came though, shouting “monkey monkey” would get their long-time friend’s attention in a way no others could.