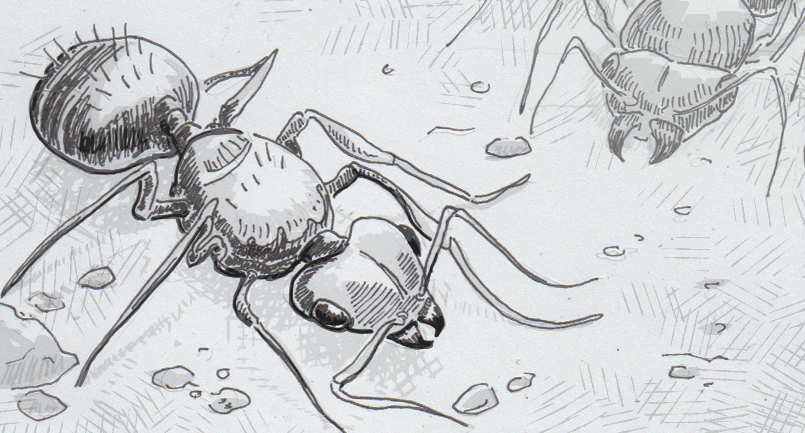 Ageless ants are ready, willing and able from the cradle to the grave

At some point in your life, you will notice that you’ve aged “past your prime.” Your joints and muscles won’t quite be up to the soccer matches you played when you were younger. You might take longer to focus on your work than you used to. You won’t be able to click a mouse fast enough to win a game of Starcraft 2. Allowing for the obvious contextual differences, none of these kinds of concerns ring true for Pheidole dentata, a species of ant from the southeastern United States. These ants seem to stay until their prime their whole lives. The only time they’re past it is when they’re dead.

As these ants age, they show no signs of the usual deterioration of abilities you expect in most animals. 120 day old ants carry just as much as their 20-day-old kin. They can actually track a scent better than some of their younger counterparts, and will attack a fruit fly with all the gusto of a hungry teenager. As such, older ants performed just as much work for the colony, without any hint of slowing down.

Internally, the ants’ brains showed no sign of aging either. A brain structure called “mushroom bodies” acts as a nexus for many neurological activities, including perception, learning and memory, and may have shown signs of cell lose as the brain’s density began to decline with age. Neurotransmitters like serotonin and dopamine often decline with age as well. However, as the behavior of P. dentata suggests, all these systems were found to be in great shape in older ants. No signs of aging were found anywhere.

The ants in this study were unusual, but in a way that really enhanced the tracking of age-related tissue damage. Thanks to predation, disease and less food stability, ants in the wild don’t live 120 to 140 days like they did in this study. However, it would seem that an unnaturally long life would allow more time for the symptoms of aging to develop. Instead, after tracking these ants from their pupa stage to death seemed to have no symptoms of decline at all. Unfortunately, they weren’t being tracked to see what their eventual cause of death was, and there’s a chance their they suddenly suffer a very steep decline in their faculties at the end of their life.

While we don’t necessarily need a world where 90-year-old humans are doing heavy lifting their whole life, we have some obvious incentives to understand the biological factors that drive aging. P. dentata and other animals that seem to avoid prolonged decline, like naked mole rats, are of great interest since they’ve somehow solved some of these problems already.