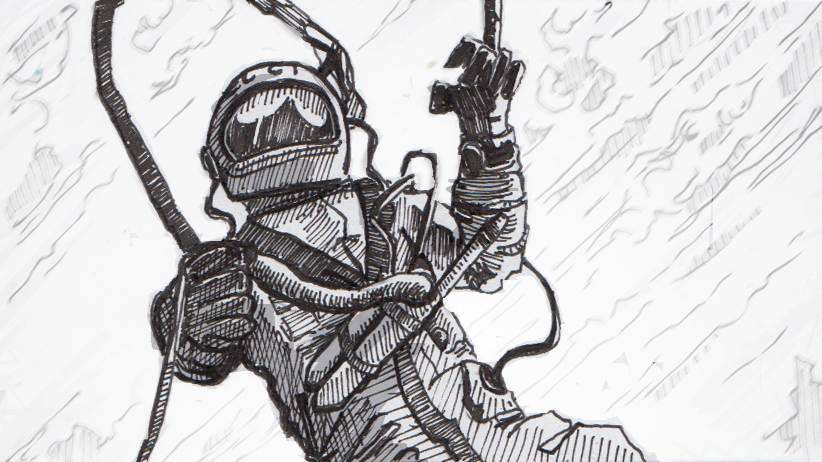 Alexei Leonov on the first spacewalk

On March 18, 1965, Alexei Leonov became the first human to venture into space outside of a spacecraft. This first spacewalk was only 12 minutes long, but in that time Leonov managed to both take note of the amazing beauty of space and have an adventure that nearly cost him his life.

His first impressions of floating in space were compared to feeling “like a seagull.” His awareness of the expansiveness of space was punctuated by the vast array of visible stars, not only overhead, but under his feet as well. As his spacecraft, the Voskhod 2 was in a particularly high orbit, he could see half of the Earth at once, accentuating it’s form as a giant sphere.

The sight-seeing wasn’t totally serene though, as Leonov soon felt that his gloves felt loose around his fingers. There was no way at the time to truly test a spacesuit for the vacuum of space, and it was slowly inflating around him. He quickly realized that if something wasn’t done quickly, he wouldn’t be able to fit back into his spaceship’s airlock. The suit had a valve to release some of the pressure, although that came with its own risks.

Leonov had trained to use this release valve, and that training taught him that rapidly changing the pressure could affect the nitrogen in his blood, causing it to “boil,” presumably from decompression sickness. He was also supposed to be performing a series of tasks, including moving cameras, re-securing harnesses, all while holding onto his tether, and with just minutes before entering the Earth’s shadow, he realized he really didn’t have any options. He had no hope of being able to properly wind in his tether in the dark while wearing a balloon, and so he dropped the pressure.

Interestingly, he made that maneuver without reporting it to his mission controllers. Leonov was concerned about breaking procedure, and opted to “silently” lower the pressure, assuming he’d deal with those concerns once safely back on Earth. At that point, he continued going off the book in order to scramble back to the Voskhod 2. He scrambled back into the airlock headfirst, which then required coming up with a way to turn around so he could eventually enter feet-first as intended. By the time he got in, he was drenched in so much sweat he could barely see, and had to open his helmet to wipe his face before the internal hatch was even closed, all in violation of protocol.

He was thankful for his training that allowed him to successfully improvise and make this first spacewalk a success, all while still having the mental energy left to worry about disciplinary repercussions from the commanders on the ground. Leonov was able to return to space again in 1975 as a member of the first collaborative missions between the United States and the Soviet Union, the Apollo-Soyuz mission.