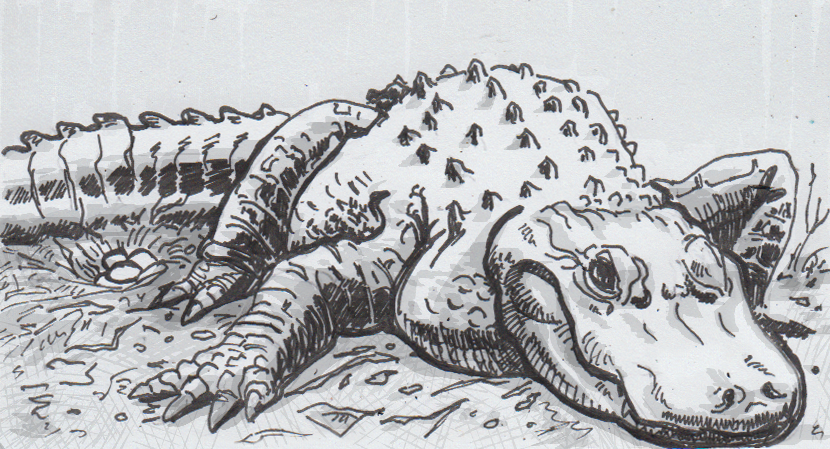 Until a baby is born, the raw materials to build that baby have to come through, or from, its mother. This is true of eggs too, which mean that reptiles and birds not only need have the extra calories, minerals and proteins to build their offspring, but they need a lot of extra calcium to house the kid in too until it hatches. Many egg-laying animals have special adaptations to help cope with this drain on their calcium, but alligators make a riskier sacrifice for their young. Their eggs have been found to deplete their bodies’ natural armor, thinning the bony plates meant to protect them.

The amount of calcium needed to produce eggs is considerable. A chicken makes up to 47 percent of its body’s calcium to produce eggs, although a number of its larger bones have abilities to cope with such demand. Assuming the chicken is getting sufficient calcium in its diet, the chicken’s medullary bones, will help produce extra calcium for egg production. These This trait is common to all birds, and has been traced back as far as avian dinosaurs. Non-archosaurs have their own tricks, with frogs and lizards carrying a special calcium-rich sac behind their skulls, which can be tapped into when the animal is gestating eggs.

While creatures on all sides of an alligator’s family tree seem to have unobtrusive sources of calcium, crocodylians seem to be slightly out of luck. While they even have the same reserve of calcium behind the skulls of lizards and frogs, they don’t actually utilize it when producing eggs. This doesn’t mean they somehow avoid the need for calcium in their eggshells though, as their clutches can have up to 40 eggs, requiring up to 7 ounces of calcium. Looking across their whole body, x-rays and tissue samples eventually found that the gators are drawing calcium from their osteoderms, the bony plates built into their backs as protection.

The potential 10 percent reduction of calcium in the mother alligator’s body isn’t a small issue. Humans often think of getting our calcium through diary-based food sources, but these animals aren’t stocking up at the cheese aisle. Many large predators, like crocodylians or even carnivorous mammals, have to depend on digesting the calcium reserves of their prey, eating the bones in addition to the meat. No word yet on if the depleted armor makes a measurable difference to the mother alligator’s safety, but it certainly gives her something to guilt trip her children with after they hatch.