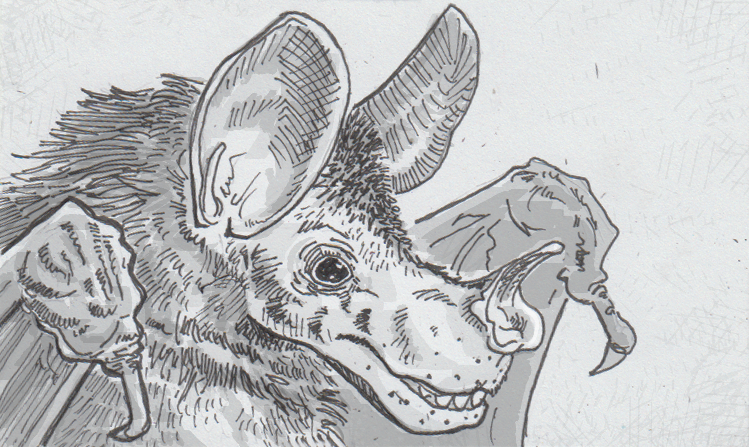 Most bats in the world, by a fair margin, are insectivores. There are also bat fructivores and the headline–grabbing sanguivores. Of course, with over 1,000 species of bats in the world, it would actually be weird if more dietary niches hadn’t been explored by members of the order Chiroptera. So while they don’t come up too often, there are a fair number of carnivorous bats as well, each dabbling in a particular specialty like amphibians or fish. What’s actually surprising is that science is only now getting around to figuring out where these meat-eaters came from.

The basic history of carnivorous bats is that they’re a branch off of the insectivorous bat lineage. Actually, they’re likely multiple branches off the family tree, as eating-non-bug-meat has evolved more than once, both in southeast Asia and South America. Now scientists are looking at the anatomy of these various species to see what they may or may not have in common, starting with their skulls.

Researchers from the University of Washington analyzed 140 skulls across 35 species, including both insectivorous and carnivorous bats. Rather than just eyeball the skulls’ features, they conducted statistical analysis of each skull’s shape, independent of its size. Filtered through data about evolutionary relationships, the analysis aimed to find which features likely evolved as a result of dietary pressures, and which were tied to other forms of selection, like sexual dimorphism or immediate kin. The final list of carnivorous traits isn’t terribly surprising, but important to isolate in order to dig deeper into these bats’ origins.

Convergence amongst the carnivores

The interesting thing about these traits is the duplication, as these adjustments to eating meat were a bonanza for convergent evolution. For example, two fish-eating species both have very similar mouths and skulls to help them grind up the spiny bones of their seafood, even though they’re hardly related to each other. Despite being from different insectivorous families, separated from each other for over 50 million years, the same basic skull shape evolved as a “solution” to the same problem of catching fish.

The same patterns were seen among hunters of terrestrial prey, but those could be compared to an even wider circle of mammalian predators. A species like the spectral bat (Vampyrum spectrum) has an unusually long snout compared to moth-eating bats, but it’s right at home next to predators like dogs and weasels. Once again, the similar morphologies turn up to accomplish similar predatory behavior, even though those mouths developed independently from each other. With these trends becoming clear, the next step is to parse the anatomy of these hunters more closely, calculating exactly how they functioned on a biomechanical level.

Source: The World’s Carnivorous Bats Are Emerging From the Dark by Rachel Nuwer, Smithsonian