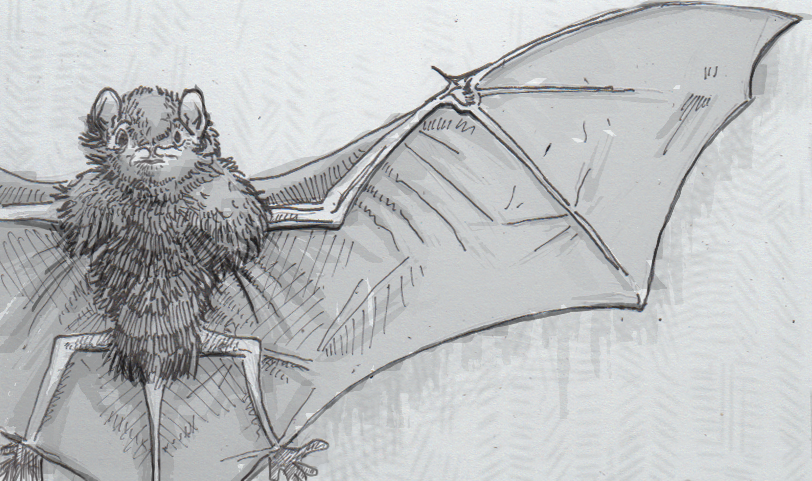 Analyzing the bat genome to see how fingers lead to flight

As fellow mammals, bats share a lot in common with mice, dogs, and of course, us. There’s a degree of variation between each type of animal of course, but for the most part we all follow the same basic body plan of one head, two forelimbs, hips and legs distributed along a spine. ‘Forelimbs’ might be the operative word there though, since evolution has obviously taken some liberties with what you’d call a bat’s arms— the humerus is recognizable, but the bones we use as hands have been elongated and spread apart, then joined with a membrane of skin to form the bat’s wings. Finding analogous bones is one thing, but researchers have been trying to figure out exactly what happened in the bat genome to turn them into the only mammals capable of powered flight.

For a starting point, the Natal long-fingered bat (Miniopterus natalensis) had its genome fully sequenced, so that it could be compared to other mammals to see what modifications had been made in the 50 million years since bat shared a common ancestor with primates (think lemurs). It turned out, a lot can be done to a genome in that amount of time, and thousands of changes in both genes and the biological mechanisms that take a segment of DNA and turn into something functional. Not only were some of these differences apparent between bats and other animals, they were even apparent in bats if you looked at their wings versus their hind legs.

As an embryo develops, the fundamentals of tetrapod anatomy start out more or less the same across many species. A spine and head usually start first, followed by nubs for limbs and a tail (humans actually start to grow tails, and then reverse course, culling those cells back to what’s left in a human tailbone.) Bat limbs stay the course at first, growing like generic “small mammal” arms and legs that could be right at home on any mouse or monkey. However, at a few key stages, the front limbs break from conformity, going on an understandably significant different course for their development, turning small paws into impressive wings. The big catch in this research is that the exact ingredients and mechanisms cause these changes aren’t fully understood yet, and they’re hard to isolate.

Process of elimination, or possibly addition

As much as you might hear about “the gene” for cancer, or obesity, or in this case, wings, genes don’t really operate in a vacuum. They function in a dynamic environment, and so it’s hard to figure out what each individual gene does on it’s own. The experimental approach to such a scenario is a bit of trial and error, trying to block specific genes in an animal to see what may or may not be different as a result. Bats aren’t really easy to work with as a model for this kind of research, even with the complete genome of M. natalensis. As weird as it sounds, it may turn out to be more practical to add bat genes to mice to see how they affect their limb development. Since a multitude of genes are involved, it’s unlikely that we’ll immediately have a true fledermaus any time soon. We will find out more about how mammals grow limbs, which should be helpful to better understand our own arms, short fingers and all.