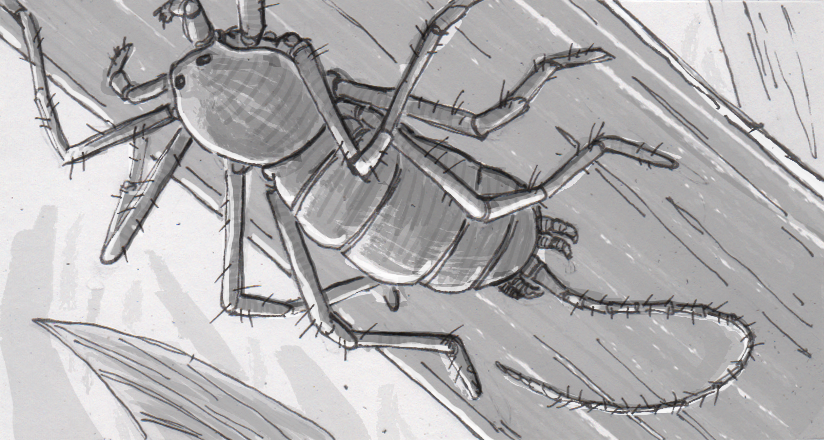 Ancient arachnid appears to be an amalgam of spiders and scorpions

Arachnids have apparently been experimenting with limbs for the last 400 million years. While modern arachnids’ eight legs may seem weird enough, what we live with today is relatively tame compared to what was scuttling around during the Mesozoic era. Specimens recovered from ancient amber have revealed other offshoots of the arachnid family tree, some of which are almost an amalgam of spiders and scorpions, complete with long, whip-like tails. There’s no evidence that those tails delivered venom, but it does give us a better sense of the wide spectrum of spidery creatures that left us with the arachnids we know today.

The latest specimen has been named Chimerachne yingi, as it’s body looks like it combines features from both spiders and scorpions. Like it’s modern kin, the “chimera spider” sported eight legs, as well as function, silk-producing spinnerets. These critical organs are actually highly specialized limbs, and weren’t present on older arachnid ancestors. Combined with an age of 100 million years, C. yingi is probably one of the closest relatives to modern spiders ever found, even though it’s not thought to be a direct ancestor of what lives today.

This is where C. yingi’s differences become relevant. Its exoskeleton is structured more like a scorpion than a true spider, with segmented plates along its abdomen that would have made its rear end more flexible. Even more dramatically, C. yingi sported a tail longer than its tiny, 0.07-inch body. That tail was thin and probably fairly flexible, evolved from yet another limb structure. It probably didn’t get used like a scorpion’s tail though, as researchers suspect it acted more like a rear-mounted antenna, allowing arachnid to probe its surroundings. Like other specific behavior, this can’t be completely confirmed from the specimen trapped in amber, but the overall structure looks more like a sensory tool than any kind of weapon or leg.

In the end, C. yingi wasn’t technically a spider. It was classified as an uraraneid, which was an order of arachnids that likely diverged from the modern spider lineage hundreds of millions of years ago. Their common ancestor likely sported the signature limbs and spinnerets, possibly along with tails too. It’s thought that the arachnids that eventually became our modern spiders must have then lost their shared tail and solidified their abdomens, diverging from both the uraraneids and arachnids like scorpions. So while this tailed creature wasn’t a direct relative of today’s spiders, its unusual anatomy is still helping us understand how spiders evolved.