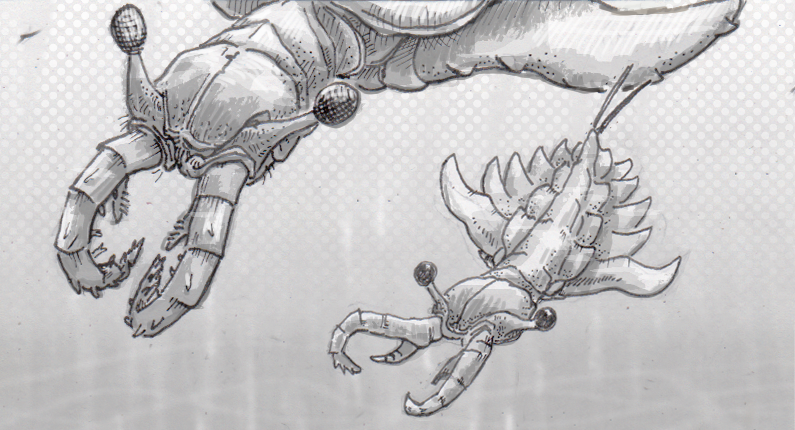 Ancient arthropods’ clawed appendages made these predators successful at any size

While they were only eight centimeters long, the top predators of the early Cambrian period were dangerous from birth. The radiodontan arthropods like Lyrarapax unguispinus looked a bit like a modern ray with claw-like appendages mounted on the front of its head that could gather food to put into their circular, serrated mouths. As arthropods, these relatives of crabs and insects, there was a chance that these predators would start life in some kind of larval form, needing to mature before they could successfully hunt for food. However, a tiny specimen from China seems to prove that these animals were well-developed predators from day one.

Despite being over 513 million years old, we’ve been able to piece together a significant amount information about these ancient predators. In addition to the eye-catching, spine-covered appendages and semi-toothed mouths, fossils have even given us a glimpse of L. unguispinus brain structures. These structures suggest that while these creatures’ bodies were quite specialized for gobbling up their neighbors, their brains were impressively straightforward. While we think of predators as often having to plan and outwit their prey, there’s a decent chance that L. unguispinus mainly got by with its physical strengths and, for its ecosystem, large size.

The newest fossil of a juvenile essentially had a miniaturized version of an adult body. Even at less than two centimeters in length, the well-developed claws and mouth of this specimen suggest that these traits were formidable even at a smaller size. This puts the tiny sea monster in company with some modern predators, like praying mantises, who are ready to hunt for themselves before they’re full size.

A mini-Lyrarapax unguispinus also has implications for Cambrian ocean ecology, since a tiny predator would have likely been hunting down tiny prey (versus scavenging or being fed by its parents). L. unguispinus would have then been an influential predator at any age, and their presence in an area would put pressure on all kinds of prey species to develop forms of defense or evasion. This then fits with what we know about ecosystems from 500 million years ago, as the so-called Cambrian Explosion saw a huge increase in the variety and diversity of species on Earth during this time. A claw-faced predator that chased down prey of all sizes very likely contributed to this diversification, since it was apparently hard to avoid being eaten by one of these spiny arthropods.