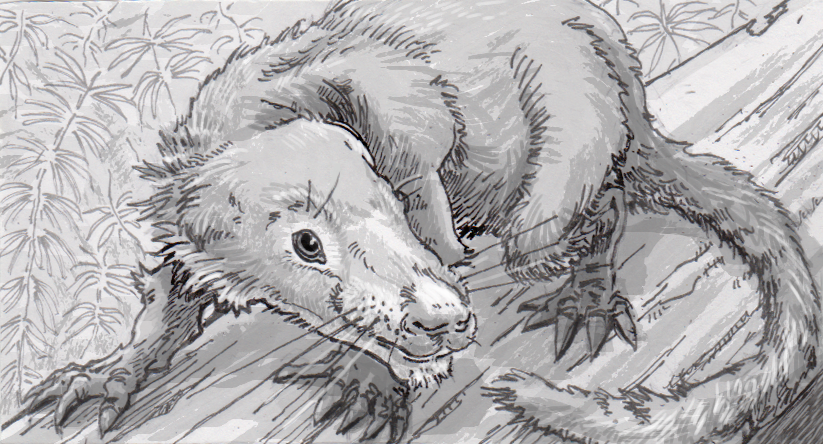 It was not terribly glamorous to be a mammal in the Mesozoic era. Most of the furry critters looked like small shrews, scuttling about in the in the shadows of the dinosaurs that ruled the world at the time. To really drive that point home, a recently described mammal-relative, Cifelliodon wahkarmoosuch, was found literally buried beneath one of its massive dinosaur neighbors. However, C. wahkarmoosuch is proving to be quite significant, providing information on everything from the evolution of mammals and their relatives to the shape of the entire world as it existed 130 million years ago.

Clearer look at a haramiyidan cranium

One of the first things that stood out about C. wahkarmoosuch was how much it was able to stand out at all. Most fossils of mammals and their relatives are either reduced to jaws and teeth, or are flattened so much that they’re hard to work with. Possibly thanks to the the bulk of the dinosaur it was buried under, this particular specimen still had a three-dimensional skull, which allowed researchers to learn more about its brain case with CT scans. Among other things, this view of the creature’s interior structures revealed large olfactory centers in an otherwise small brain, which, when coupled with relatively small eyes, suggests that C. wahkarmoosuch navigated primarily by its sense of smell.

C. wahkarmoosuch was also unusually large for its time. While most mammal-like creatures in the Cretaceous were still mouse-sized, this species of haramiyidan likely grew to a whopping two-and-a-half pounds. While that’s nothing that your average house cat couldn’t handle today, it was certainly larger than most of its contemporaries.

Most significantly, what really grabbed researchers’ attention was just how much C. wahkarmoosuch resembled other haramiyiadans and other mammal ancestors from other parts of the world. For most of the Mesozoic era, there was essentially one giant landmass on Earth, called Pangea. Pangea started to break apart as early as the late Triassic period, but most estimates expected that they were much more fractured by the time C. wahkarmoosuch lived 130 million years ago. However, C. wahkarmoosuch seems to share a number of features with fossils found in South America and Morocco, which has researchers rethinking this timeline. When coupled with a growing number of dinosaurs turning up with similar, cross-continental anatomy, C. wahkarmoosuch helps build the case that these continents may have broken up 15 million years later than we thought.

My third grader asked: Well, how do they know how old it was? What if it was buried 15 million years earlier than they thought?

In this case, researchers could look at the sediment layers they dug through to get these fossils, the other fossils buried in that layer, and most importantly, the amount of lead and uranium found in zircon crystals mixed in with the other rocks.

When zircon crystals are formed in underground magma, uranium is able to become mixed in due to chemical similarities between zirconium and uranium. That uranium is radioactive though, decaying into lead over time at a fixed rate of change. Since we know that rate of decay, researchers can compare the ratio of uranium and lead in zircon crystals to see estimate how old a particular zircon crystal is. Once multiple crystals are compared, this radioisotope dating technique can date a rock or fossil to within 200,000 years- a fairly precise measurement compared to the millions of years discussed above.