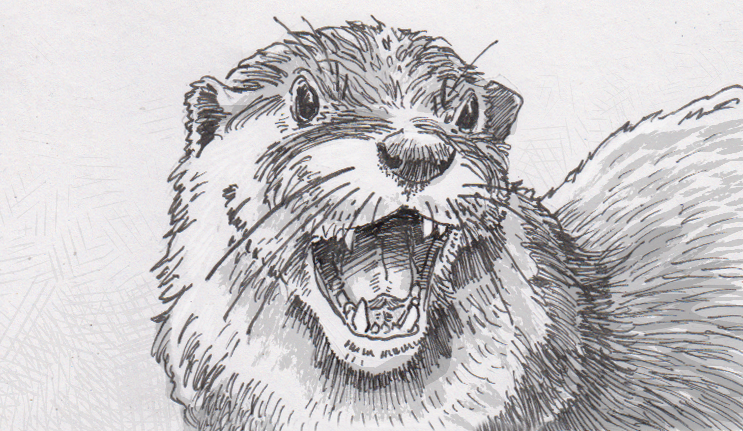 Ancient otter had a bite big enough to put mollusks, mammals, birds and turtles on its menu

Paleontologists may have identified the most dangerous, and by extension, cutest, otter to ever live. Siamogale melilutra is estimated to have grown to 110 pounds in size, possibly acting as the apex predator in its local environment. This assessment isn’t just based on the otter’s wolf-sized body though, as researchers have also simulated its jaw strength, suggesting that this fuzzy critter could have probably munched just about any animal it got it’s mouth on.

S. melilutra lived around six million years ago in what is now southwestern China. It would have been a wet, swampy area with thick plant growth with plenty for an otter to eat, assuming these carnivores ate similarly to their modern river otter cousins. That’s a wide range of possibilities, as modern otters are known to eat everything from plants to rodents to clams. Once researchers factored in how the size of S. melilutra must have influenced its bite strength, they had to expand the possibilities to include thick-shelled mollusks, birds and even the local turtles if it felt like it.

Otter bites are generally pretty impressive, being driven by large muscles in their face that also lead to the cute cheeks people find so adorable. To create a more detailed picture of S. melilutra’s bite, researchers scanned fossilized jaws with computed tomography (CT), getting a picture of the ancient bones inside and out. They calculated the range of the jaw’s movement and how much force it could exert on a crunchy snack, then compared that to similar calculations based on modern otters to see if the results fit with better known otter-anatomy. The overall trend was that smaller otters tend to have smaller, sturdier jaws than their larger kin. However, S. melilutra broke that trend as it’s jaws were six-times stronger than you’d expect for it’s size. Basically, it’s bite was even bigger than it’s already large body.

While calculating the physical forces a skull can exert is helpful, otters tend to complicate matters with their behavior. Most animals’ bites are correlated with the food they need to break apart more than their overall size. If this were strictly true in otters, clam-eating sea otters would have even more enormous jaws than they already do in order to break open hard shells. By using rocks, the otters have come up with an alternative to bigger teeth and jaws, and so their anatomy doesn’t need to match their diets so closely, allowing for the closer correlations with body size. Even allowing for this otter-specific weirdness, the fact that S. melilutra had both larger and stronger jaws still suggests that it was a top predator, as its powerful bite would have put just about everything in it’s environment on the menu, even without figuring out how to break shells with stones.