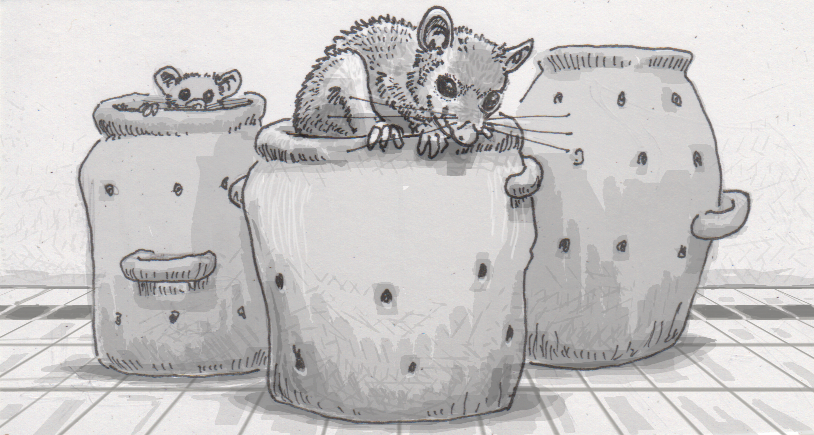 For all of the foodie-themed photos people share today, the world somehow lacks gratuitous shots of dormice being served for lunch. This seems like a missed opportunity, because edible dormice were one of the original foods to brag about, with scholars and elites writing down details about how the rodents were served in lieu of selfies and filtered photos. Like the particular interests of gourmands today, this interest wasn’t because edible dormice were a staple of the ancient Roman diet, or because they were necessarily that much tastier than any other roasted mammal. Serving up dormice was a way for hosts to dazzle their guests without making a huge investment in the process.

From pot to plate

A serving of edible dormouse (Glis glis) might include honey, poppy-seeds, pepper and bits of pork. The layered flavors alone would have been impressive to a Roman audience, as more modest meals would have been heavy on salted meat or fish, as the salt was a critical preservative for less-than-fresh foods. Dormice, on the other hand, didn’t need the space or resources a pig did, and they could be raised in a villa without much fuss. The animal was placed in a ceramic pot called a gliarium, where it was fed and watered until it was ready to be eaten. With small air holes and just enough room to move around, a dormouse didn’t have much to do besides sleep and fatten up.

Once it was time to eat, the fact that dormice weren’t actually difficult to raise didn’t seem to matter much. They were apparently valued enough that supplying them could be a profitable enterprise, but not really enough to amount to more than an appetizer. Like exotic foods of today, people made notes about eating a dormouse, particularly its size as testament to the host’s wealth, but their relative scarcity clearly helped make them more intriguing than your average squirrel or rat.

Dormice aren’t on many menus anymore, but their may still be in trouble. Hazel dormice (Muscardinus avellanarius) in England are in decline, with populations dropping 70 percent in 20 years. As their absence on Instagram proves, this decline isn’t due people making them into fancy appetizers again, but larger environmental problems. Habitat loss, climate change and local woodland management are all suspected to play a role in shrinking dormouse populations in England.