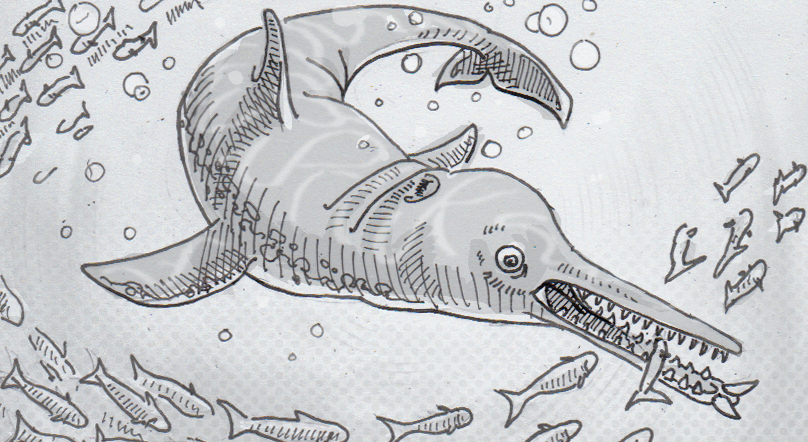 There’s not a lot of glamour in dying in a puddle of your own vomit. Ending one’s life in corrosive stomach juices is so embarrassing, it can even tarnish the reputations of beloved rock stars (although not too much). There are definite upsides though, as that last moment may actually end up being preserved for nine million years, only to be discovered and studied by paleontologists. In the case of one lucky Messapicetus gregarius, a whale from the Miocene epoch, dolomite has preserved the regurgitated last meal, revealing ecological details as well as possible clues about the animal’s unfortunate death.

M. gregarius was a 13-foot beaked whale, with a mouth and head resembling a modern dolphin. While more modern relatives are generally deep divers, this particular specimen was apparently feeding on sardines in the shallows off of what is now Peru. The block of dolomite it was found in was incredibly hard and difficult to work with, but that meant that it also preserved crucial details to the whale’s story.

A group of ancient sardines was found in the whale’s stomach and around its mouth. With the fish not turning up in any of the other surrounding rocks, it appears that some of the fish were on their way out of the whale’s mouth when it died. Even the fish found in its stomach showed next to no signs of digestive damage in their scales, indicating that they had only recently been swallowed. If the whale was trying to regurgitate the fish as it seems, it’s quite likely that it was trying to avoid being by some kind of toxin. The fact that these fish were likely filter feeders raises the possibility that they were in the shallows eating a toxic algal bloom, which the whale then ingested second hand.

Aside from the foray into paleontological forensics this fossil offers, it also provides evidence that these whales weren’t feeding just like their modern descendants do (although maybe you could say the modern descendants are better off avoiding meals like this.) Other M. gregarius were found nearby, showing that this wasn’t just one ill whale wandering off by itself. The one missing piece of evidence in this slice of ecology is a direct fossil from the algae to cement the whole scenario. Still, the circumstances required to create these regurgitalites (fossilized regurgitated material) and gastrolites (fossilized stomach contents) don’t leave too many other options about how this whale’s life ended.