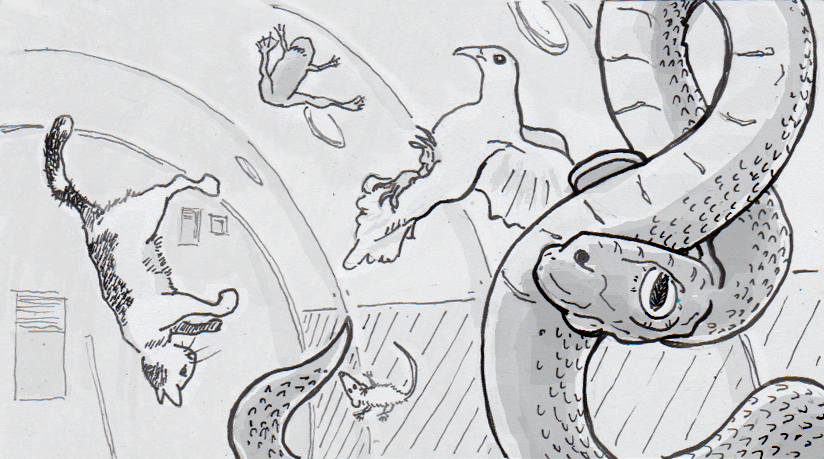 Animals don’t seem to enjoy microgravity in the Vomit Comet

We’ve been sending animals into space for over fifty years, both as test-pilots and as living experiments. Living in low gravity is apparently quite stressful on Earthbound organisms, and that’s ignoring the potential perils of being rocketed out of the atmosphere. Some looks at microgravity have been slightly less intense having taken place in an airplane rather than low-orbit, but they still revealed some interesting aspects of animal physiology and behavior.

This series of experiments were performed in a reduced gravity aircraft, more commonly known as a Vomit Comet. That name of course is courtesy of a common effect of microgravity on humans, thanks to the incredible shifts in forces on the body over a span of only 65 seconds. During that time, the plan climbs to 34,000 feet at a 45º pitch. It quickly levels off, leaving occupants in a state of microgravity for up to 25 seconds, followed by a plunge back down to 24,000 feet.

Many of the animals that have made this extreme journey did not seem to become immediately nauseated, as they were more concerned with figuring out what happened to the ground. Cats reacted with their common “righting response,” causing them to spin themselves repeatedly as they searched for a landing pad. Tree frogs also seemed to assume they were just falling, and assumed their normal diving pose during the period of weightlessness. Pigeons successfully flew, but they were so disoriented about their spatial relationship to the moving plane that some even flew upside-down.

Weightless snakes on a plane

Out of all the various animals that have had the privilege of these flights, one of the more striking groups were the snakes. As the snakes twisted and scrambled in confusion, they would often brush by parts of their own body. At that point, they would either bite themselves, or curl up in a ball and start to relax. Both behaviors seem to be tied to the snake possibly not recognizing it’s own body— either it felt it was another animal that was part of the the stress it was experiencing, or it felt it was another snake to take comfort with (as snakes sometimes do when in groups). This would mean that the snakes’ internal sense of their own body, their proprioception, is somehow either dependent on their orientation to the ground or is simply much weaker than you’d expect, but in normal circumstances it isn’t tested.

Some of these tests are used to look for candidates for future research in orbit, which may be part of why a variety of dogs, chimps, mice, frogs, spiders, newts and even fish have been brought into orbit, but snakes haven’t ever gone higher than 34,000 feet.

My kindergartner asked: Was the snake that bit itself ok? The snake mentioned was a Western rat snake (Pantherophis obsoletus) and as a constrictor was not venomous, so the bite probably wasn’t a big deal either way. It it had been venomous, it would have probably been more serious.

Source: Here's What Happens To Snakes In Microgravity by Jason G. Goldman, io9