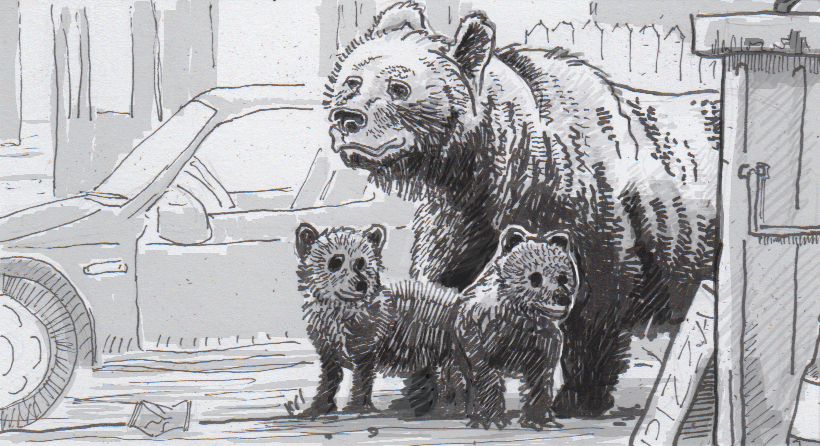 Bears don’t belong in the suburbs. When they’re spotted in human neighborhoods, they’re clearly lost, disoriented, or searching through our garbage for our leftover junkfood. It’s clearly a bad scenario for random bears to be around humans, which appears to be the exact reason mother bears have been leading their cubs towards our towns. During key parts of the year, the dangers of being near people is the bears’ best bet for safety, and they know it.

Necessity drives these mothers to exploration

For all the cars, guns and panic that humans may turn against a bear, the biggest threat to bear cubs during mating season are adult males of their own species. The male brown bears look for potential mates rather aggressively in the late spring and early summer, trying to catch a possible mate before mating season is over. If a female already has cubs, a wannabe father may go as far as killing her young so she’ll be compelled to mate again. Researchers in Quebec have been tracking bears during this volatile time of year, and found that mother bears seem to be making use human civilizations as a sort of safe zone for their cubs when lone males are afoot. The mother bears don’t seem to relish hanging out near human development, as they usually lead their families back to the woods as soon as mating season, and thus the male threat, has passed.

The maternal calculations about relative risks seem to be correct though. Mother bears who were tracked hiding their among human activity were found to have more surviving young at the end of a mating season than those who stayed deep in the woods.

The enemy of my predator is my friend

Bears aren’t the only animals that seem to have found an use for human encroachment into different habitats. Moose, elk, and deer have been found to cluster near human activity when pursued by predators, exploiting the fact that most humans react much more dramatically to something with sharp teeth than with hooves. Sometimes these relationships take on daily cycles, as demonstrated by Ethiopian nyalas (Tragelaphus angasii), a kind of antelope, and the hyenas who would really like to eat them if given the chance.

From accounts with locals, GPS data and surveys of hyena scat, the nyalas in the Bale Mountains National Park have figured out when to eat, and when to hide out near human settlements at the park’s edge. During the day, the nyala graze near the center of the park, as one might expect. Hyenas in the area generally hunt at night though, and so the nyalas move to be closer to human villages, counting on people to chase the hyenas off since nobody really wants a group of bone-crunching predators hanging around. There was the chance the antelope were attracted to the villages for the food they were growing, but they were happy to spend the night even during seasons when no food was available, indicating that the protective company was the real draw.

The fact that animals have found a benefit to being near people doesn’t suddenly justify the impact we have on their native ecologies, of course. If anything, the ingenuity demonstrated by these various species shows that we should consider more nuanced explanations for animal behavior, as they’ve apparently been learning how to deal with us beyond sources discarded food. As humans continue to influence more and more territory on Earth, these kind of interactions are likely to become more and more common, meaning the various predators involved are going to have to step up their game as well.

My second grader said: The hyenas need to start hunting during the day to catch the nyalas! Nobody wants starving predators!

Source: Mama Bears Use Humans To Keep Their Cubs Safe by Joshua Rapp Learn, The Age of Humans: Living in the Anthropocene