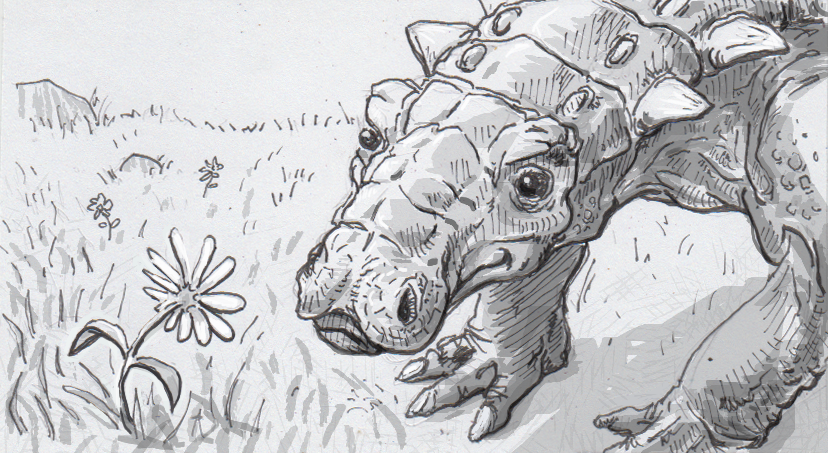 Ankylosaur skull shows it specialized at smelling, not smashing

While a lot of attention is paid to ankylosaur tails and their bony cudgels, an earlier ancestor in the family has been getting some close examination for its nose. Pawpawsaurus campbelli was a smaller relative of the famous Ankylosaurus, and while it didn’t have a weaponized tail, it did sport some tell-tale armor across it’s back and head, right down to its eyelids. CT scans of a skull from Texas is shedding new light on this family dinosaurs’ advanced brain structures, and how they evolved before so much attention was given to their rear ends.

While much can be learned through direct observations of a fossil, in this case CT scanning allowed paleontologists to look at much finer detail of the inner structures of P. campbelli’s skull. Those scans allowed for the creation of highly accurate 3D models, revealing strikingly large nasal cavities, as well as a relatively large olfactory bulb in the brain. The degree of specialization, including nostrils as big as its eye sockets, suggests that smell was a vital component to the dinosaur’s survival, rivaling many predators noted for their keen senses. Aside from detecting potential threats, these nasal cavities would have helped locate food and importantly, potential peers and mates. This last aspect is highlighted in ridges along the nose that may have allowed for some amazing hooting and honking as a form of communication.

This isn’t to suggest that P. campbelli was the pinnacle of ankylosaur sensory development right before some kind of backslide towards cudgeled-tails. In the 35 million years between P. campbelli and Ankylosaurus, these brain structures seem to have only become more sophisticated. Ankylosaurus may have actually had even more acute senses of smell and hearing. To support it’s tail, it also had a an additional brain structure devoted to motor control called a flocculus. It seems that rather than make trade-offs as the lineage evolved stronger defenses, ankylosaurs kept their mental abilities upgraded as well. The only trade-off to be noted at the end of the Cretaceous period may have been less hooting and honking.

My first grader said: Maybe with armored eyelids they could close their eyes and rely on smell and hearing if a predator came.

As much as I love the idea of a ankylosaur fighting predators like some sort of blindfolded ninja from a martial arts movie, there are actually changes in their skull evolution that suggest their brains specifically adapted to providing steady, functional vision when swinging their tails around. They probably didn’t want to fight any more blindly than necessary.