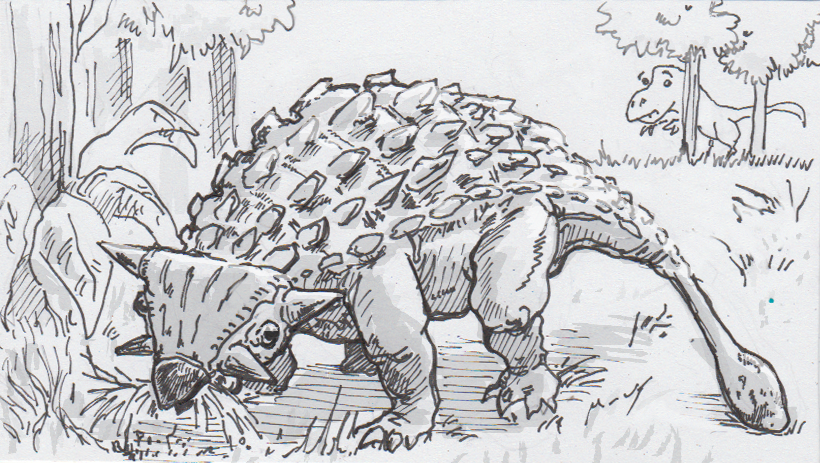 Despite how famous wielders like Stegosaurus and and Ankylosaurus are, weaponized tails are actually uncommon among dinosaurs. Yet even with so few examples to allow for variety, there’s an amazing amount of contrast between the thagomizers on stegosaurs and the clubs of anklyosaurs. While the former was based around flexibility and puncture damage, the latter shows an interesting set of traits to ensure ankylosaurs made the most of blunt force trauma opportunities.

The best offense grew from a good defense

Ankylosaurs were covered in boney armored plates, called osteoderms. The armor provided protection for the animal just about everywhere, including the eyelids on some species like Euoplocephalus. However the osteoderms on the tail served a slightly different purpose, as they were large and fused together to create a strong, stiff structure for most of the appendage.

The rigid tail plating was then backed up by other softer tissues to turn the tail into a weapon. Low, wide hips provided ample space for muscles to attach, and were probably coupled with stiff tendons to not only control the tail but keep it aloft and in place. The range of motion was actually fairly limited, laterally, which may have made helped save energy holding and maneuvering such a heavy appendage around.

How much punch could the tail pack?

So what could this rigid club do? It’s been estimated that the larger tails could hit with 10,000 Newtons of force, which may have been enough to break the ankle bones of a large theropod like Tyrannosaurus Rex. For reference, a pro baseball player hitting a fastball operates around 3400 Newtons, so it’s easy to appreciate how this tail would be fairly intimidating and dangerous for opponents.

However, which foes were subject to these pummelings hasn’t been completely figured out. While a tail club (or should we describe it more like a hammer?) could definitely be a threat to a would-be predator, there’s also a chance that these tails were used in intra-species battles, such as for mating rights or status in a herd. Unlike telltale slices from teeth, shattered bones are tougher to directly link to a single source of damage.

My kindergartner asked: Would the flexible portion of the tail, closer to the hips, but a weak point for attackers to target? If restorations are accurate, it looks like armor on the upper part of the body covered the top of the most flexible portions of tail. And even if there were a point of vulnerability there, getting at it that close to the business-end of the tail would be a difficult task.

Source: Ankylosaurs, the armored dinosaurs that could pack a punch by Victoria Arbour, The Charlotte Observer