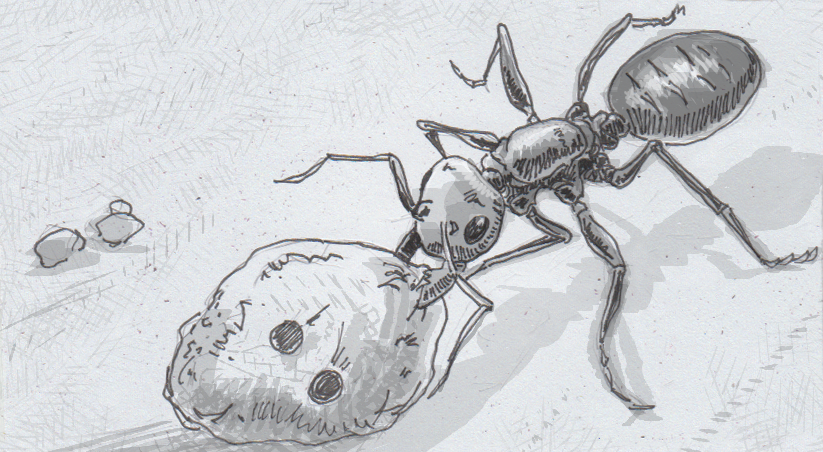 Ants don’t get disoriented even when walking home backwards

If you’re ever lost, be careful about retracing your steps. Without clear landmarks, there’s a very good chance you’ll wander further off course, or just end up moving in circles. If not large reference points are available, maybe look for some ants carrying food home, because there’s a very good chance they know exactly where they’re going. Even if they’re getting there backwards.

Without clear landmarks, humans tend to walk themselves in circles without realizing it. Whether blindfolded or just in repetitive terrain like a sandy desert or a dense forest, people will unintentionally move in circles as tight as 66 feet across. At this point, scientists aren’t sure what causes this circular path but at the very least it seems like humans don’t generally make use of the more subtle reference points that ants can use, like the position of the Sun in the sky.

Heading home in any direction

Once an ant has a destination in mind, it can be turned turned around any which way without a problem. In experiments, foraging desert ants (Cataglyphis velox) were placed at a fork in their route home, carrying some cookie crumbs with them. No matter what direction the ants were started in, they managed to pick the right path home. When carrying a bulkier payload, the ants often resorted to dragging food behind them, but walking backward didn’t seem to present a problem to their navigation. There were some quick glances over the ants’ shoulders, but overall the only landmarks necessary was the Sun. Scientists were able to confirm this by using a mirror to block the Sun, which was the one thing that seemed to disorient ants’ internal navigation.

While it may be a bit humbling to learn that the average ant can route themselves home better than the average human, that wasn’t the purpose of these tests. Ant brains are tiny, and yet they’re accomplishing considerably complex tasks. Our personal navigation systems probably won’t be getting an upgrade, but robots that we build may be able to borrow some of the systems that ants are using. This is just one step on the path to figuring out how those processes work.

Source: Ants use Sun and memories to navigate by Helen Briggs, BBC News