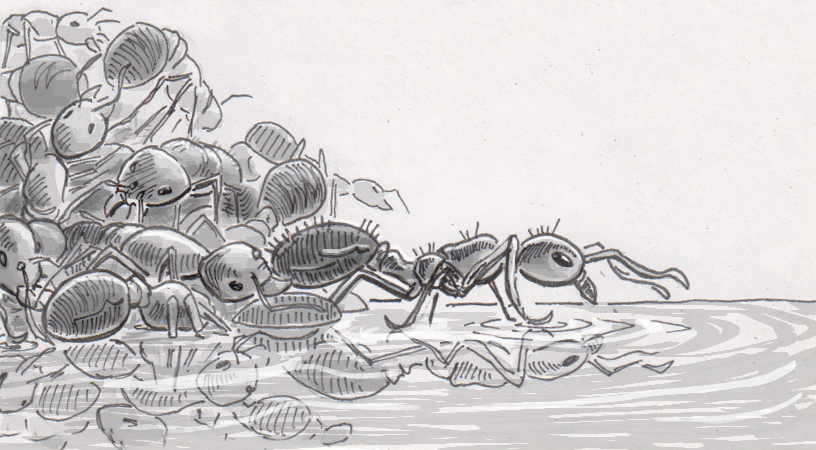 Ants float through floods by assembling into rafts and towers

As devastating as floods can be to human homes and infrastructure, they basically guarantee evictions for creatures that live underground. As water levels rise, insects like ants can’t lay down sand bags to keep their colony dry, but that doesn’t meant they simply drown. Ants in flood-prone areas around the world instead take advantage of their small sizes and large numbers to build themselves into means of escape, from amazingly durable rafts to living towers to scale new heights.

Floating with your friends

During a flood, a colony of ants will evacuate their underground tunnels and begin transforming themselves into rafts. With no executive planning, ants will rush out to the edge of the existing raft, then grab onto neighbors with their mouths, claws or foot pads. With enough workers, a raft of ants can support themselves, plus larvae and their queen that usually get to ride in the center of the raft for extra protection. Once assembled, an ant raft can hold together for weeks, even without individuals rotating positions within the raft’s structure.

The durability and buoyancy of the raft depends a lot on how hydrophobic ant bodies and hairs are. A drop of water on a fire ant’s head is likely to remain a single droplet, rather than breaking and wetting the ant’s whole body. As a group, this effect can trap significant amounts of air in the spaces between ants, to the point that a submerged ball of ants will carry air underwater with them in the process. Air bubbles trapped on ant body hairs can then be used for respiration and to increase buoyancy, keeping even 500,000 ants something approximating “dry” until they find solid ground to land on. If anything, the biggest risk of being in the water is fish, who can pick off ants that protrude from the edges of the raft.

Climbing as a colony

For all the resilience an ant raft provides its… members? (occupants?) it doesn’t work in every scenario a displaced colony might face. When ants find something solid and vertical, like a plant stem, they can start building themselves into a sort of bell-shaped tower. As with the rafts, each individual isn’t working with centralized directions, instead scrambling around to meet a couple of conditions as best it can: one ant can support up to three peers, if linked ants can’t surround the stem with linked arms, the tower needs more layers, and if you sink to the bottom of the pile, climb up again.

The squishiness of the towers means they’re not so much structures as much as processes. Tagged ants were tracked as they moved through the tower repeatedly, and it seems that the whole thing isn’t as static as a raft, but it’s enough to help ants reach new heights that might otherwise be inaccessible. Of course, if the surface of their new scaffolding doesn’t require a tower, they’ll skip it. People have found out the hard way that poking at ant rafts with an oar will very quickly lead to whole new set of unwanted passengers. Even though they can make their own rafts and towers, it seems that these ants are still appreciative of any assistance people can inadvertently offer until things dry out.

Source: How do fire ants form amazing towers and rafts without a master plan? by Craig Tovey, The Conversation