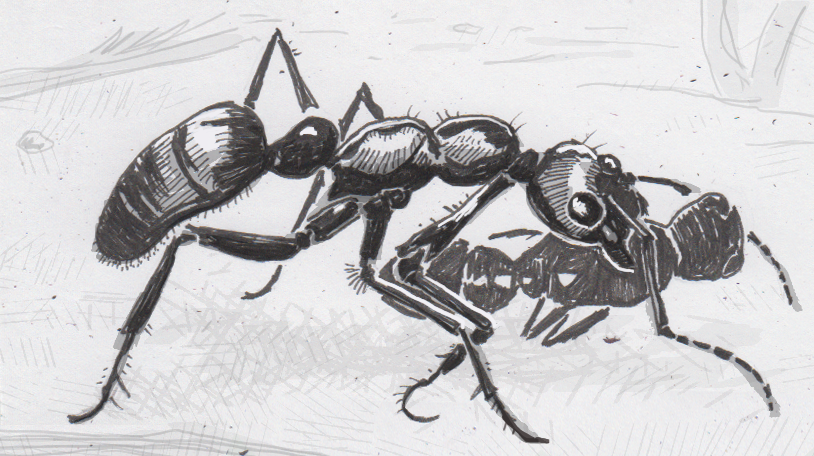 A species of ant apparently values every member of the colony, even if that’s one life out of 500. Members of Megaponera analis regularly engage in combat with termites, and while the ants are generally successful enough to carry home enough dead termites to help feed the colony, plenty of soldier ants are injured enough that they might not make it home alive. The key to survival is aid from other ants, who will carry their injured compatriots home so that they can live to fight another day.

Termites are the primary source of food for M. analis, and the ants have to regularly raid their nests to stay fed. Scouts explore the local environment, reporting back when they find a collection of termites. With a target selected, raiding parties of up to 500 ants will then head out at dawn, dusk, or possibly the middle of the night if three raids are to take place in 24 hours. As this schedule indicates, raids are orderly affairs, with soldiers marching  three-abreast in a long column, then gathering around the lead scout before attacking so that the entire force can strike at once.

The termites aren’t completely helpless though, and will fight back to defend themselves. While the ants are successful enough to find these raids energetically profitable, they can die or lose legs and antennae in the fighting. Termite mandibles can even hold their grip on an ant even if the termite has died, which can eventually prove fatal to a lone ant who’s mobility is impaired. This is where the aid of other soldiers comes into play.

Soldier ants will see to the needs of their injured peers when returning home. This can mean simply removing termites clamped on leg, or carrying ants that have lost a limb. If left unaided, impaired ants face a 32 percent increase in their mortality rate, mainly because they become easy targets for predators like spiders when slowly limping home. Scientists marked injured ants, and found that if they were helped home that they were usually fit enough to engage in further raiding activity as soon as the next day, having had enough time to get used to their missing appendages.

Compassion, or chemicals and headcounts?

This might seem like empathetic behavior, but bringing home injured ants is really some good cost-benefit analysis in action. The high recovery rate of injured ants means that they’re an important component of future raiding parties, making up as much as 21 percent of any strike force. If all injured ants were left behind, it could reduce the overall size of the colony by as much as 29 percent, making those raids much more costly to the overall group.

Rather than relying on a sense of compassion then, the ants were actually found to have a discrete mechanism to trigger help. It was noted that healthy soldiers showed no concern for injured ants when leaving the nest, only assisting them when it was time to return home. This is probably because the injured ants only ask for help at that time by releasing the pheromones dimethyl disulfide and dimethyl trisulfide. That chemical signal, not a sense of empathy, would flag an ant as being in need of rescue, even if it was wiped on a healthy individual.