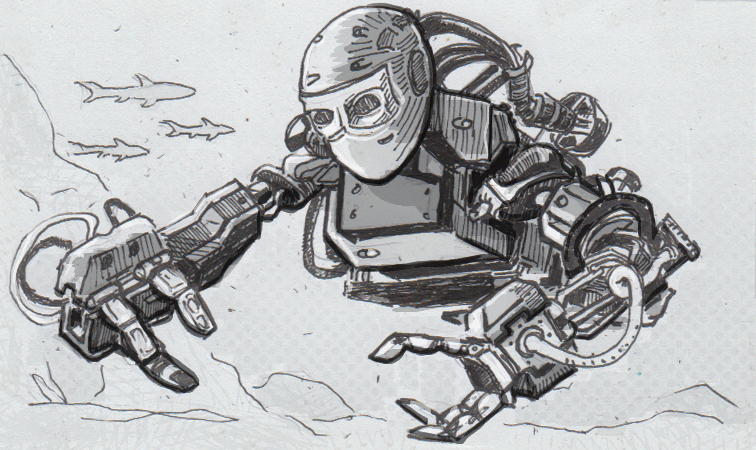 If you were going to build a robot to explore the ocean, you might consider modeling it after proven travelers of the sea, like fish or whales. This idea, called biomimicry, is based on the notion that evolution may have solved some design problems already, and so modeling your fins after those proven to work on a fish might kick start your engineering efforts. Sometimes you need to really think about what your robot needs to accomplish, which is why Stanford designers have been building their aquatic robot on land-loving humans.

This robot, dubbed OceanOne, isn’t being built because human legs are surprisingly adept at maneuvering through the water. The anatomy of greater interest is the hands and head. OceanOne is built a bit like a tailless mermaid, if that still counts as a mermaid. The rectangular fuselage is close the the size of human adult, with locomotion provided by a set of eight multi-directional propellers. At the font end, stereoscopic cameras are mounted as eyes in a proportionally correct head. Fully-articulated arms and hands finish the package, all trying to replicate the abilities of a human diver underwater.

While other autonomous or remotely-piloted seacraft have had arms and cameras, OceanOne aims to tie this into a package that will “feel” natural to a remote operator at the ocean’s surface. The pilot will be assisting the maneuvers of a body similar to their own, which when monitored through the first-person perspective from the cameras, provides some of the benefits of proprioception— the intuitive sense of where one’s body is and can move, even when you’re not looking at it. This allows pilots to naturally assist the robot through tight fits, or perform intuitive movements that might not be easily discovered by an algorithm, such as a small push up to rise above and over a small obstruction. Again, the millions of years primates have had arms can contribute to this manufactured object.

The hands take this all a step further, as they provide haptic feedback to the control sticks used by the pilot. This allows the robot and pilot to apply just the right amount of pressure to handle delicate objects, like coral or piece of ancient pottery. Programming in the robot’s on-board computer help with each maneuver, stabilizing the body automatically and adjusting for other feedback, but for moments that require other reference points, like the expected weight of a 400-year-old vase, a human’s brain and experience can then augment the system to allow for greater versatility and accuracy on a variety of missions.

While OceanOne could conceivably work alongside human divers, the intent is that it will eventually dive to areas where human safety would be a concern. With a maximum depth of 3280 feet, the craft could bring human sensitivity and judgement to locations previously accessed only by boxy, more awkward devices.