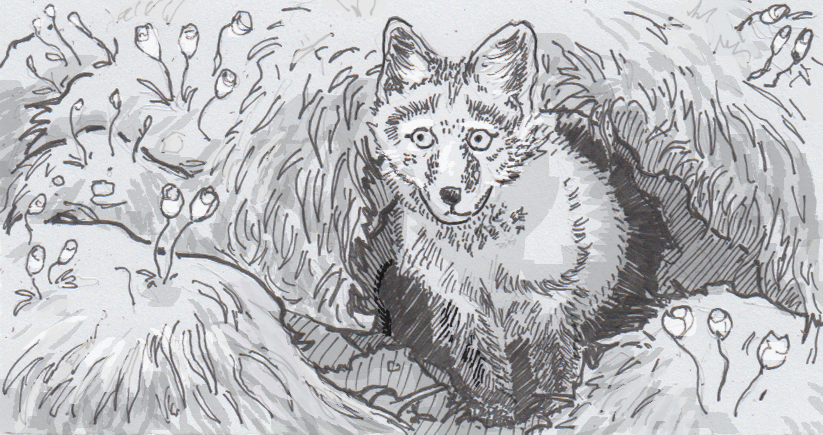 Arctic foxes sometimes travel for hundreds of miles, but they have some very good reasons to return home. Or rather, they have very nice homes to return to. Fox dens are often dug from the sides of hills or embankments, but are more easily spotted by the flourishing greenery on top of their roofs. They stand out against the otherwise drab tundra as an oasis of green, a place inviting not only to the foxes residing there, but also to other wildlife in the area.

These garden-topped homes aren’t easy to come by, but the foxes (Vulpes lagopus) do their best not to work too hard on them. In an environment where every calorie counts, foxes will sometimes seize other burrows started by other animals, like ground squirrels, saving themselves the trouble of starting from scratch. Other more established dens are likely to be reused for generations, with some dens being over 100 years old. Once inside, the foxes aren’t actively tending the above-ground gardens of course— that task is handled passively thanks to regular infusions of nutrients from the foxes urine, feces and leftovers. Especially during the winter when foxes avoid ingesting snow or ice, fox urine becomes very concentrated, making it amazingly potent sources of nutrients like nitrogen.

The benefits of these pre-war, garden-topped dens is more than just aesthetics. The fox gardens not only boast more plants than the surrounding tundra, but often more diversity as well. This makes for an attractive buffet for herbivores like caribou during the summer, as well as scavengers looking for things like dead geese that may have been hiding in the tall grasses. Foxes may get a bit of a treat from this food web as well, as they’re known to gobble the eggs of snow geese as fast as they can get them. So for a goose, the dense garden may look like a good place to nest, but they really need to be wary of the furry landlords living down below.