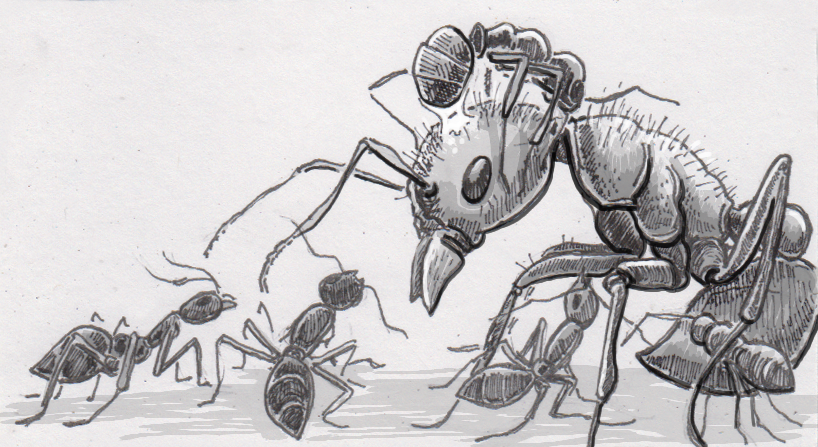 As countless action movies have taught us, one of the best tactics to defeat an unstoppable adversary is to use their strengths against them. When those adversaries are invasive Argentine ants, it’s hard to immediately throw their abilities back at them. For instance, it’s unlikely that we could convince one of a colony’s multiple queens to suddenly assassinate her sisters. Similarly, it’s not clear how we might convince neighboring Argentine ant colonies to suddenly become competitive with each other. However, the way these ants fight native species may finally be providing an opening, as the chemicals they use in an attack might soon be used against them.

Argentine ants (Linepithema humile) are smaller than many other ant species, but that doesn’t stop them from engaging in combat. When taking on something like a Californian harvester ant (Pogonomyrmex barbatus), the Argentine ants will engage in what’s known as gaster bending, wherein they dab their gaster, or abdomen, against their foe’s body. Upon contact, they secrete a mix of compounds, including dolichodial and iridomyrmecin, which have been confirmed to cause irritation and disorientation in the recipient. Even more importantly, these secretions attract other Argentine ants to the fight so that they can overwhelm the native ant in a larger attack. While researchers aren’t about to start dabbing Argentine ants with their own secretions, the fact that these compounds call in more ants may prove useful in the production of bait hydrogels.

Unlike the hapless harvester ants, humans have two ways to fight Argentine ants, both of which involve poisoning them. Insecticides can be sprayed in an area, and can be effective for a length of time on various surfaces. However, they can also end up leaching into water supplies and harming other animals. A more discrete option is then baiting, where a poison is mixed into an attractive substance, like sugar water, for the ants to eat and carry back to their colony. The poison is slow to take effect, allowing it to be shared with a greater number of ants before they start dying off. The best baits come in the form of hydrogels, which resemble small, gelatinous pellets, and remain potent for longer periods of time while requiring smaller doses of poison.

Naturally, bait only works if it’s attractive to the target. One way to heighten the allure of toxic hydrogel pellets is to add ant pheromones to the mix, which attracted more ants, and thus performed 32 percent better than “unscented” controls. That’s impressive on its one, but the secretions from battling Argentine ants may be even better. In addition to attracting more ants, the fact that the dolichodial and iridomyrmecin also irritates native species would help avoid accidental poisonings of the wrong ant. Even though the ants use these secretions to target their competition, it looks like it may do a great job of targeting Argentine ants as well.

The importance of the invasion

At this point, Argentine ants have spread to many parts of the world. The problem is that as an invasive species, none of their new ecosystems have any way to keep them in check. While they generally don’t attack each other, as Argentine ants drive out native species they essentially break the ecosystem- important duties that native species previously carried out, like pollination, don’t get done. The fact that Argentine ants also preserve pests like aphids in order to harvest their ‘honeydew’ makes them an even bigger problem, which is why there’s so much research looking for ways to control, or at least curb, their world domination.

My four-year-old said: I feel sad for the other ants.  I don’t like these ants! They’re bad… I guess they’re good for the aphids though, and ladybugs eat those.