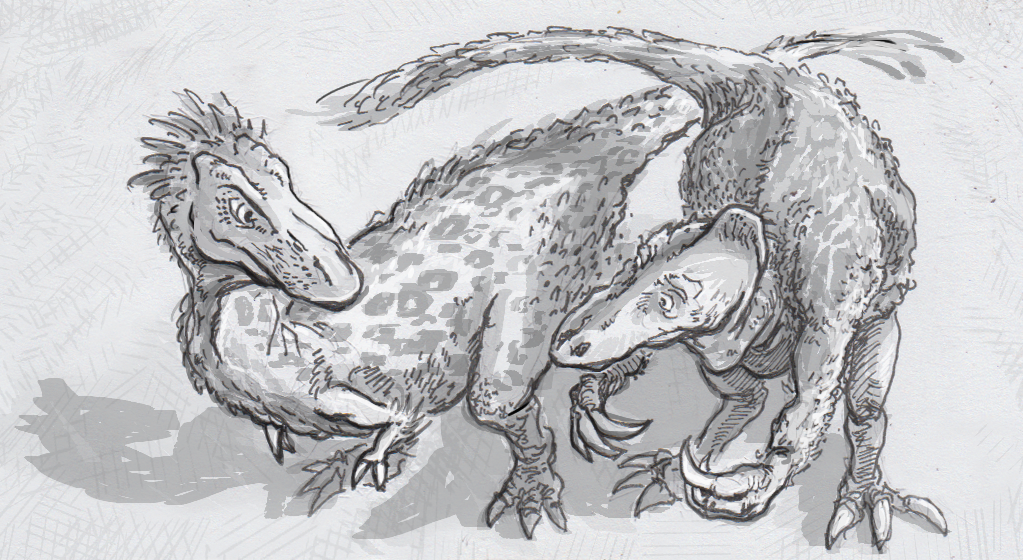 What kind of dinosaur do you get when you cross the long, clawed hands of a raptor, the beginnings of a head crest, long, light-weight bones of a bird, plus the size of an Allosaurus or Tyrannosaurus? Paleontologists aren’t entirely sure either, but they’ve decided to name the thing Murusraptor barrosaensis, making it the second confusing theropod out of Patagonia to be announced in the last month. Perhaps there was some kind of bizarre skeletal-shuffling happening those rocks, but both Murusraptor and the unrelated Gualicho shinyae have a hodgepodge of features that make identifying their place in dinosaur lineages rather difficult.

Murusraptor was built less like the heavy-headed Tyrannosaurus rex, and a bit more like a scaled up Velociraptor. While it could have likely grown to around 30 feet long, it didn’t have the massive jaw of a T. rex, countered by much longer arms, which were tipped off by 14-inch, sickle-shaped claws on each thumb. The large creature may have moved and hunted more like a fleet-footed raptor as well, since may of its bones showed pneumatization, wherin bones have hollowed cavities  inside, making them lighter than more solid structures.

This seems like a straight-forward story, when put together, but many of these traits haven’t been seen bundled in the same animal before. As such, paleontologists have been struggling to understand if this megaraptor was  was most closely related to the coelurosaurs, like a T. rex, allosaurs, like Allosaurus, or maybe have some strange tie-in the maniraptors, which is the lineage that went on to become modern birds. The specimen discovered was only a partial skeleton, but the juvenile animal’s head was quite well preserved. Even with all that, researchers are hoping to find more examples of related animals in the same rock formations in Argentina.

Rather than the missing link for Murusraptor, a different team in Patagonia instead found Gualicho shinyae. Gualicho has at least been confirmed to be an allosaurid, but doesn’t really resemble any of its closest neighbors. This theropod was a bit smaller, probably not weighing more than 1000 pounds, but was striking for how little of that weight came from its arms. Rather than the lanky, clawed arms found on Murusraptor, Gualicho had arms the size of a human child’s with only two digits each. While this seems like one of the hallmarks of a tyrannosaur, these small limbs were likely a case of convergent evolution. For a certain hunting style, tiny forelimbs may have presented an advantage, which is why matching but unrelated anatomy would have evolved.

At this rate, we’ll hopefully be finding a long necked theropod with a neck-frill or tail spikes, since evolution seems to have been having a field day in Cretaceous Patagonia.