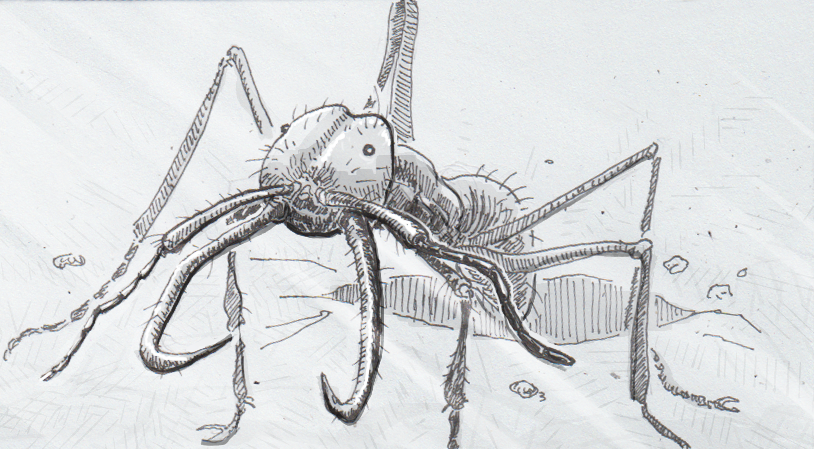 If you don’t have use for a tail, you shouldn’t bother to grow one. The resources needed to produce the bone and muscle, and then keep it alive your whole life, might be better used on body parts you do depend on. Ditching a tail makes sense as from a human perspective, but it’s good to keep in mind that different environments have different demands. If you’re an animal happily living without sunshine or moonlight, even something as ubiquitous as eyes, and the accompanying brain structures needed to use them, aren’t worth the trouble. Fortunately, if circumstances change again, it appears that evolution might be able to help restore lost body structures, sometimes even stronger than before.

The army-ant subfamily Dorylinae is at least 78 million years old. Like most ants, they spend some time above ground, and some below. Over time they became more predominantly subterranean, and their visual capabilities diminished as sharp vision was no longer of as much use. Around 18 million years ago though, the lifestyle of Eciton ants shifted, bringing them to the surface where being able to see would again be a helpful trait to posses. Since being able to see predators and prey their ancestors had previously avoided underground, Eciton ants not only saw evolved more sophistication in their eyes, but their visual and olfactory centers of their brains increased as well.

Measuring this increase wasn’t easy, because even a large ant brain is only as big as a grain of sand. Ant heads hat to be fixed in resin so that they’d be stable when getting sliced into layers. The exposed brains were stained so that they’d be easier to parse, and then the final volume was calculated by measuring the number of slices that were required for that particular brain. The meticulous process was worth it though, as no only did researchers find the growth in sensory processing areas in the ants’ brains, but that the regrown eyes had evolved in a way that was not a genetic rollback to want earlier, sighted ancestors had possessed. Instead of simply restoring the lost eye structures, the Eciton ants seem to have reininvented them, leaving them with eyes distinct from other insects today.