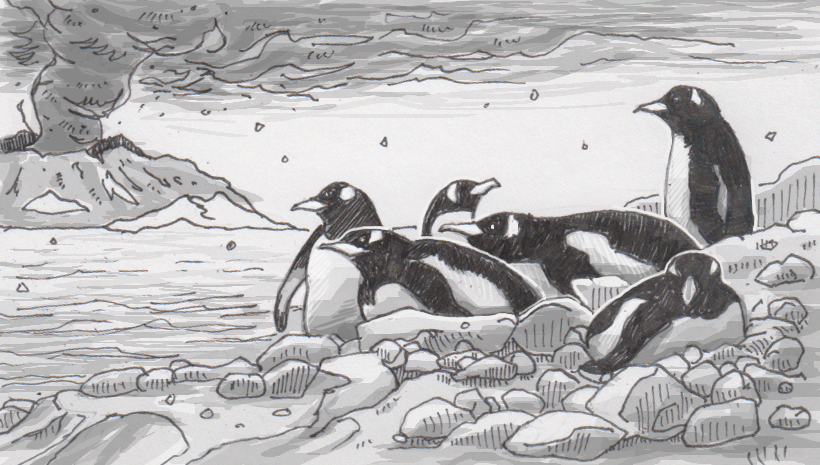 Gentoo penguins grow to around two-and-a-half feet tall, weighing no more than 12 pounds. Like many penguins, they live off the oceans just north of Antarctica, catching fish, squid and krill. They are quite adept swimmers, staying underwater for up to seven minutes, diving as deep as 655 feet and moving at a record-setting 22 miles-per-hour. They are not, however, fireproof. They do require fresh air to breath. And they require food to eat. For these reasons, it seems fair to say that their choice of nesting grounds on Ardley Island off the Antarctic peninsula may not have been the best place to start a nursery.

Actually, Ardley Island isn’t all that bad, as far as Antarctic nesting grounds go. There isn’t a lot of scenic flora exactly, but there’s open space and plenty of pebbles to construct nests. The adults don’t have to worry about any predators (outside of human hunters) on Ardley, and thus have used it during mating season for around 7,000 years, according to bone and guano layers in sediment cores from the area.

However, those same sediment samples also reveal that Ardley Island has a very destructive neighbor. Deception Island may look benign from the outside, but it that appearance is deceptive, as it hides the fact that the island is basically the caldera of a volcano. The volcano’s last major eruption was in 1970, but that was small compared to what likely took place 3,000, 4,300 and 5,300 years ago. Layers of thick, toxic ash indicate that those eruptions were large and explosive, akin to the Mount Saint Helens eruption in 1980.

Judging by the amount of penguin poop laid down after the ash, the penguins didn’t fair too well during each eruption. Populations were probably decimated, taking four to eight hundred years to recover each time. The sediment cores can’t fill in every detail, but it’s likely that only well-fed adults would have survived these eruptions, particularly if they could have swam away from Ardley Island in a hurry. The fact that gentoo penguins generally share nest building, incubation and parenting duties pretty equally, any volcanic activity during mating season would have been devastating to these colonies.

However, you could argue that the penguins have actually won this battle, at least in the long run. Deception Island isn’t completely dormant, but it has been a lot quieter for the last 2000 years, and the penguins haven’t given up nesting on Ardley Island. Further eruptions are of course possible, but humans have followed the penguins lead to a degree, setting up harbors, whaling outposts and now science and tourism facilities inside the caldera itself. There aren’t, however, any new nurseries at this point, so human populations aren’t incurring a major risk in the case of future eruptions.