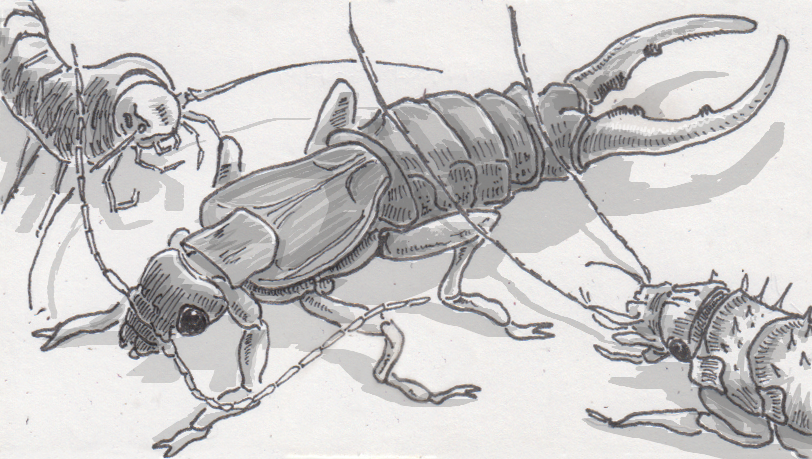 According to my kids, our street is on the verge of being inundated in dangerous insects. My four year old has warned me that “if you step on a pincher bug, it will bite your foot!” which… well yeah, most animals try to defend themselves if you step on them. So what vicious mandibles were my kids and their friends uncovering? The pincher bugs turned out to be earwigs, with a few cameos from silverfish (or maybe a firebrat.) Since these creatures really only pose threats to aphids, cardboard and old book bindings, it seems that our suburban street is still as tame as you’d expect it to be.

To be fair to my kids, earwigs (Forficula auricularia) are probably the most intimidating-looking insect in this group. Their abdomens carry curved appendages technically known as forceps, but that have the visual panache of a bug-sized antler crossed with a claw. Since they’re on the abdomen, these forceps can’t really deliver a bite, but a larger male earwig could possibly give you an uncomfortable pinch if you scared it (or stepped on it.) The forceps are more often used to fight with rivals over potential mates, like the hardware on stag or Hercules beetles, and as such are generally larger on male than females.

The name “earwig” of course confuses people’s understanding of these bugs’ ecology. Myths about burrowing into ears aside, the name is most likely the result of a misunderstanding of the name “earwing.” This name would have been much more descriptive, since these aphid-munching creatures have little interest in ears, but do have unusually shaped wings. The only way these bugs do make themselves a problem for humans is when they can’t find their preferred food and attack plant roots in a garden— a far cry from even attempting to assault humans.

A few members of the Zygentoma order have also been found around our house, more commonly known as silverfish (Ctenolepisma longicaudata). These ancient insects can scuttle around at impressive speeds, flattening their bodies out to squeeze through tight spaces where they prefer to stay out of sight. They’re not great at climbing though, which is part of why you find them stuck in smooth-sided containers like your bathtub or a certain kid’s toy bin. They lack any appreciable claws or spines, and, despite some rumors to the contrary, can’t cause harm to you (although your belongings might not be so lucky).

One of the neat things about a silverfish is that they can go months at a time without eating. However, in the average American household, they don’t have to worry much about that thanks to people stocking their houses with papers, glues, cardboard, pastas, as well as veggies and bits of mold. Eating mold probably won’t raise any complaints, but people do run into problems with silverfish eating the starch around the house, which can lead to damaged books, stolen dry food, or holes in clothing. If you have spiders around though, they’ll probably help keep your silverfish populations in check.

While silverfish appreciate moist locations, their firebrat relatives prefer heat. Firebrats (Thermobia domestica) basically copy a lot of the silverfish lifestyle, but do it closer to your hot water heater, furnace or other hot spots around the house. Looking like a striped version of a silverfish, they’re equally harmless to people, but also potentially hazardous to books, glues and other starchy objects.

So I think between this collection of creepy crawlies, plenty of craneflies, daddy long-legs, a few black widows plus wasps and bees, it’s probably still safe to let the kids play outside. If we can keep the mosquitoes at bay, we may even survive the summer.

Source: Earwig invasion! Pest inundating gardens eats your fruit -- and those nasty aphids too by Jeff Spurrier, LA at Home