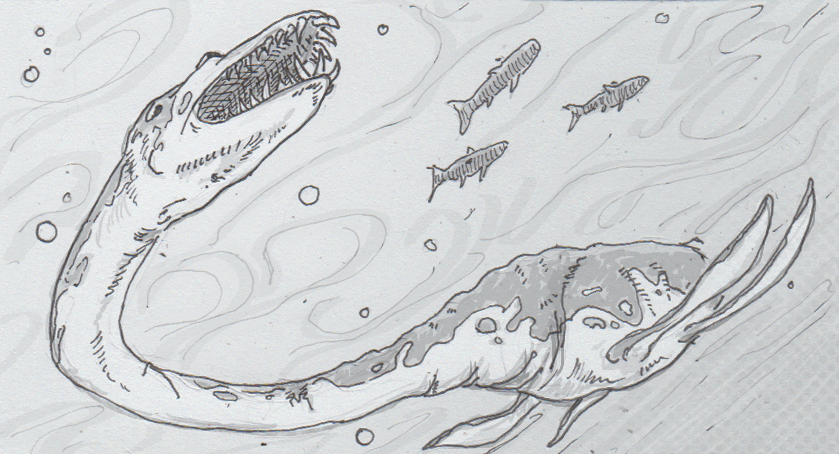 Attempts to understand the elongated necks on elasmasaurids

If we’ve learned anything from sauropods, giraffes, and say, ostriches, it’s that long necks are for grabbing food that’s otherwise out of reach. Right? Well, that idea gets a little fuzzy when looking at elasmasurids— extinct, flippered reptiles that sported some of the longest necks the oceans have ever seen. Water allows for a lot of movement, meaning there shouldn’t have been too many places that their mouth wanted to get to that their body wouldn’t be able to follow. With no living descents to compare to, figuring out the benefits of aquatic super-necks has been a difficult process.

One of the first elasmasurids to make headlines had a neck so long its discoverer couldn’t even recognize it. When Edward Cope found fossils of Elasmosaurus platyurus in 1868, he mistakenly put the skull at the tip of the animal’s tail, leaving it with a very long tail as a result. Joseph Leidy corrected this in 1870, correctly identifying the 19-foot-long appendage made up of 70 vertebrae as E. platyurus‘ neck.

Since that time, various ideas have been offered trying to best guess how elasmasaurid put such necks to use. A neck that long seems like it should have been super flexible at first glance, especially with so many vertebrae to work with (compared to a human’s relatively stumpy seven neck bones.) However, snakes generally rely on 130 to 500 vertebrae to coil and writhe to that degree, and elasmaurids probably didn’t bend more than 176° to the right or left (not that looking directly behind yourself isn’t impressive!) On the other end of the spectrum, elasmasaurid necks certainly weren’t the stout columns of a giraffe or brachiosaurus. Getting back to the idea of reach, a long neck might have made sense to reach food out of the water, if it weren’t so heavy. Obviously many dinosaurs lifted their heads on long necks, but it’s been estimated that these marine reptiles likely wouldn’t be lifting much more than their heads out of the water if they were cruising along the ocean’s surface.

Reasons for such reach

With all those limits, there are still some interesting ideas about what these necks would have been good for. One popular idea is that elasmasurids might not have been the fastest swimmers, in which case a long neck could be used to dart out, surprising and catching prey like a harpoon. The necks may have been used to reach into crevasses, like mouthed-tentacles, to find food. It’s been suggested that they carried electrifying organs, turning the neck into a big electric eel, so to speak. And of course, whenever you see a bizarre structure on an animal, don’t forget the sexual selection option, since mates often seem to be selected for awkward pieces of anatomy.

At any rate, the benefits of a long neck don’t seem to have been completely compelling, as the fossil record shows that different species of elasmasurids had different neck proportions, including a couple instances where the necks were actually shorter than those of their ancestors. Maybe they couldn’t figure out why they needed to be so long either.

My first grader said: Having a long neck would be risky. If you were sticking it in a hole to find food, you couldn’t see what was coming up behind you to bite you.

This is of course, true. Aside from the electric-eel hypothesis, which is hard to test with only fossils available, there haven’t been many signs that elasmasaurids had much in the way of protection for their spines, which is definitely seems like a concern in a world with short-necked, large-mouthed mosasaurs.