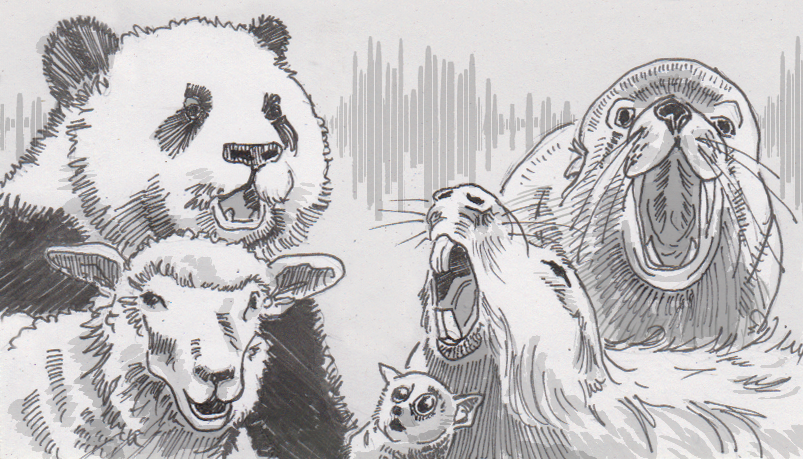 Auditory details are more easily understood when vocalizations have vibrato

No offense to your singing, but your voice has a lot in common with a bleating sheep. It’s not that you actually sound like a sheep or goat, but that humans rely on similar vocal tricks to increase the specificity of sounds they can make. The underlying principle of a vibrato-like pitch modulation has apparently evolved in a variety of mammals, making it easier for listeners to identify specific sounds and vocalists.

Sound is often discussed in terms of pitch and volume, but a lot of the qualities we pay attention to are thanks to how frequencies get layered on top of each other. While multiple frequencies are produced at once, we anchor our perception of the sound the lowest frequency in the bunch. The overall effect is the sound’s timbre, and is how you can tell the difference between a middle C on a piano versus the same note on guitar. In our throats, the modulations that help English speakers hear the difference between the vowels of “ship” and “sheep,” are called formants, and they’re apparently pretty popular among our fellow mammals.

To test the importance of trilling formants to our ears, researchers synthesized animal calls for humans to listen to. The bogus bleats weren’t meant to match any particular animal’s vocalizations, as the focus was on what kind of difference vibrato would make. When formants included a bit of trill, subtle differences were easier for listeners to pick out, suggesting that they help our ears discern details that might otherwise be lost in a conversation, or evolutionarily, an alarm call.

We’re obviously not the closest cousins with sheep, and we didn’t pick up our vibrato from them directly. Looking through the mammalian family tree, researchers found that trilling has evolved independently at least six times in different families, resulting in everything from pandas to fur seals having a way to put an extra edge on their voice. The next step in this research is to see how much these other species react to the presence of trilled formants, making sure sheep really appreciate how good they are at baa-a-a-a-ing.

My third grader asked: What’s a panda sound like, anyway?

Source: Why Sheep Calls Have That Unmistakable Vibrato by Nathaniel Scharping, D-brief