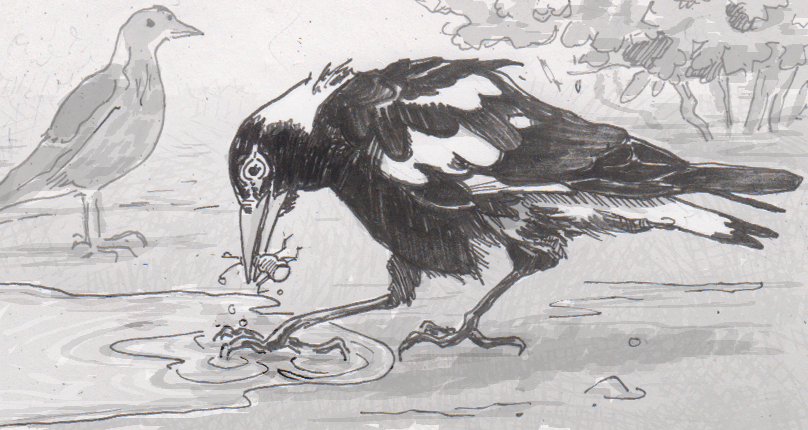 Australian magpies have been observed dunking their food in water before eating it, but unlike the obvious tastiness of putting a cookie in milk, scientists can’t really explain why they do it. The process isn’t terribly complicated, usually involving putting giving a dead bug a quick dip in a puddle, but it’s specific enough that it may be shared culturally with younger magpies. At this point, the leading hypothesis for eating wetter bugs include toxicity, digestion and yes, flavor, but it make take comparisons with the wider range of food-dunking birds to really understand what’s driving the desire for lightly-marinated meals.

Scientists suspected that Australian magpies (Gymnorhina tibicen) might moisten their food before eating, and so they presented some Mountain katydids to eat. As expected, an adult magpie grabbed a katydid and beat it against the ground before taking it to a nearby puddle. The bird then held the bug underwater with its beak, giving it a quick, vigorous shake as if to shake off loose debris, or possibly confirm the insect’s mortality. Once satisfied, the magpie retreated to a bush to eat the bug.

That individual was then seen preparing a second katydid in the same way, demonstrating its technique like a cooking show. It dipped and thrashed the katydid, but then left it by the side of the puddle before backing away. A nearby adolescent magpie then approached, copied the dunking and thrashing motions, and then ate the bug.

What makes this preparation so popular?

The specificity of this behavior suggests that there’s a technique being passed from one bird to the next. It’s quite possible that the birds consciously teach each other this recipe for eating insects, although there may also be a more general instinct at work. At least 25 other species of brainier birds, including parrots and crows, have been observed dunking their food before a meal, and so there may be some instinctual instructions about wet insects that have been inherited from a shared ancestor.

The choice of Mountain katydids is significant, as it may help explain the motivation for this dunking. The insects aren’t dangerous to the birds, but they do have enough toxins to taste bad. This has lead to the idea that the dipping and thrashing may help mitigate the katydid’s toxins, at least enough to make them taste better. On the other hand, the process may simply be to soften the food before swallowing it. Many of the other species of dunking birds aren’t dependent on toxic insects, and so wouldn’t need to dunk more benign foods like fruit or  nuts. This supports a second explanation tied to digestion— perhaps a quick dunk in a puddle makes the food easier to digest, allowing the birds to get more nutrition from them.

If the latter advantage is confirmed, it could mean that dunking is these birds’ form of cooking, helping their bodies power their bigger brains in the same way that heated food helps humans. The advantage for the birds is that their recipe never puts them at risk for burning their food.