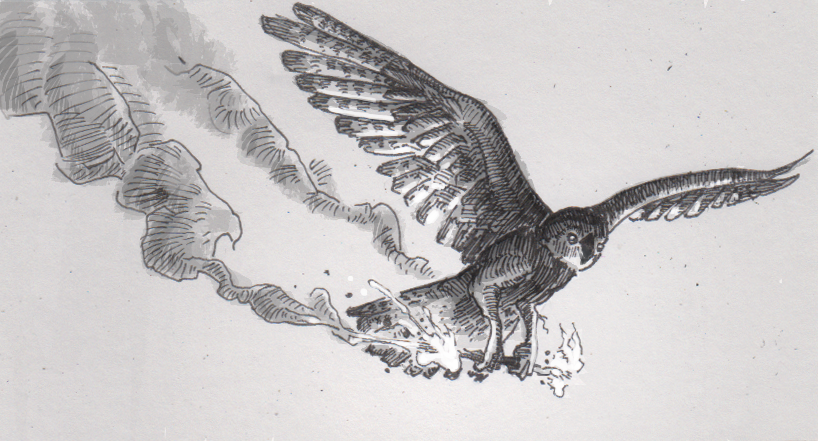 Australian raptors said to set fires to scare out prey

It seems like a brown falcon’s curved beak and sharp talons should be enough. Many other raptors seem to find all the prey they need to stay nourished, but these natives of Australia apparently want more, and are reported to be using fire to help with their hunting. The falcons (Falco berigora), along with black kites (Milvus migrans), have apparently been seeing carrying and dropping flaming sticks on dry brush, presumably to flush small prey like snakes and lizards out of their hiding spots. This would definitely take birds’ tool use to a new level, as they’d be the first non-human to manipulate fire to this degree, but biologists are still hesitant to confirm the falcons’ fire-mastery.

The idea that a bird could be retrieving burning sticks to scare up prey isn’t all that far-fetched. Birds like crows and parrots have been known to use sticks and stones as tools in a variety of contexts, so using a stick to achieve a goal shouldn’t be impossible for a sharp bird of prey. Harris hawks in the United States can plan their actions well enough to hunt in teams. The most analogous behavior probably comes from black kites themselves, who have been documented using breadcrumbs as bait in order to lure fish to the surface of ponds where they can be more easily captured. With this much sophistication already established in birds’ hunting techniques, it seems reasonable that they could handle the cause and effect of dropping flaming sticks to scare other animals, assuming they’ve learned to get over that same fear themselves.

Playing with fire often produces dramatic results, but biologists still feel that the falcons’ and kites’ activity isn’t so obvious. The primary concern is that it hasn’t been objectively documented. At this point, most of the evidence describing the birds’ behavior is from personal anecdotes compiled by Bob Gosford, a lawyer from northern Australia. Gosford has been gathering first-hand accounts from fire fighters and Aboriginal people, trying to make sure descriptions are as concrete as possible. Aboriginal tradition has helped with this, as the birds’ behavior has apparently been consistent enough to be included in ceremonies, artwork and culture. While personal memories can be easily distorted, the consistency in people’s accounts suggests that raptors really are moving fire around Australia’s grasslands.

To try to definitively document the falcons’ fire usage, researchers and rangers will be ready to film the birds this May. In preparation for fire season, rangers will be lighting controlled burns in northern Australia, which offers the closest approximation of a controlled test anyone could expect. With any luck, the raptors will take advantage of these burns and demonstrate exactly what tactics they’re using with their flaming sticks. This would be of interest not only to biologists, but to ecologists and the rangers as well, since it would mean that fire safety measures would need to start considering the possibility of fires being set by lightning, humans **and** pyromaniacal raptors. It also raises questions of fires in the past, as landscapes that were thought to have been burned by humans may have actually be reshaped by hungry birds.