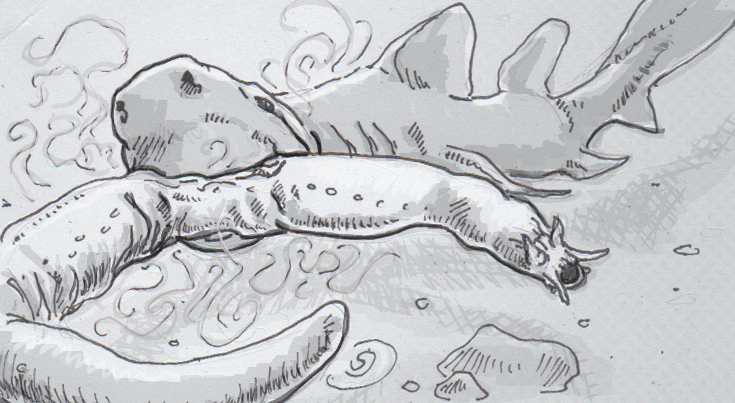 Hagfish are a strange mish-mash of mostly unattractive features that help keep them off the menu for most marine predators. The mottled-gray fish resemble eels, and while they do have a skull, they somehow lack jaws and a backbone. That might sound unpleasant to us, but what keeps them unappetizing is the fact that they can release a cloud of slime from glands running along their backs, which can startle and possibly even clog the gills of a would-be predator. However effective the slime may be, scientists noted that it’s often only deployed after a predator has attacked, leading to questions about how these boneless wonders survive being bitten in the first place.

Without bony armor, spikes or spines, the likely defense mechanism was even more wriggling floppiness. Hagfish (Eptatretus stoutii) skin fits very loosely over their musculature, only being anchored along a line along the center ridge of their backs, as well as the aforementioned, slime-releasing glands. As such, damage to the animal’s exterior is quite likely to only be skin deep, sparing their more vital anatomy from real harm.

After observing various predators attempt to eat a hagfish in the wild, researchers put these mechanisms to the test in a lab with a simulated shark bite and some hagfish carcasses. A mako shark tooth was attached to a guillotine apparatus, then dropped into the hagfish bodies. The tooth had no problem piercing the loose skin, but was then diverted or slowed enough that it didn’t harm underlying muscle tissue. In contrast, jawless, eel-shaped lampreys were also tested, but their taught skin did little to protect their muscles and organs from the tooth. While both hagfish and lampreys would be wounded in such an encounter, the loose skin seems to save the hagfish from irrecoverable harm, buying them time to slime their aggressor.

Slack skin for a tight squeeze

If this flexibility wasn’t beneficial enough, it may also allow hagfish to squeeze in tight spaces without serious harm. Their boneless body can contort, even into a knot, but would still risk being scraped and sliced if the fish tried to maneuver between sharp rocks. With loose skin, the fish’s skin just gives and stretches as necessary, similar to the loose folds on a subterranean naked mole rat. As the hagfish moves through spaces smaller than their natural diameter, skin and blood can just be squeezed as necessary to get where they want to go.