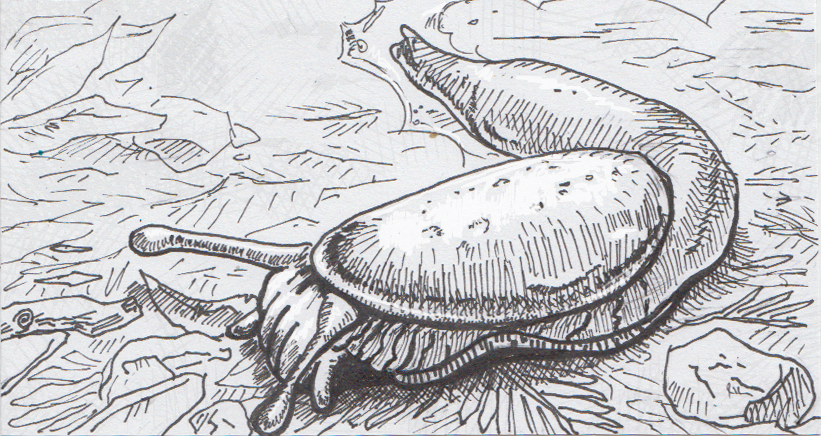 Banana slugs and their amazing boogers

Banana slugs are possibly one of the most striking animals you’ll find in the woods along the North American west coast. When you find one, the yellow color isn’t the only thing worth noting, however. They’re also amazingly slimy, and that slime serves a number of purposes.

What is banana slug slime?

The slime is actually mucus. As the slugs are very sensitive to drying out, the mucus is produced in glands along the bottom of their body, and then secreted out in small, compact portions. These little mucus pellets don’t take much water out of the slug— instead they actually absorb moisture from the environment like a sponge. The mucus can then be fully realized as a liquid crystal, which is key to the slugs mobility.

A liquid crystal is somewhere between a liquid and a solid, on a molecular level. The molecules are arranged, like in a solid, but loose and flexible, more like a liquid. This semi-structured state lets the banana slug’s slime act as a lubricant, so that the slug can safely slide over dirt and debris on the forest floor. But it can also act more like a glue, letting the slug climb by sticking to surfaces like a tree trunk. But the slug’s slime is even more versatile than this, as a handy 2-in-1 transportation system is only one of its uses.

As the banana slug moves long, the trail of slime persists, and can be discovered by other slugs. Chemical markers mixed into the mucus indicates what direction the slug was moving so that his or her peers can follow, creating opportunities to mate.

If all that weren’t enough, the slime can also be a slug snack. Other slugs, or even the slime’s creator, can consume the mucus trail to reclaim some of the nutrients, proving that banana slugs never listen to their moms about not eating their boogers. So should we start eating our boogers? Probably not.

The mucus created by the human body is very similar to the slug slime, but it’s obviously being used differently. We’re not skating and climbing on slimy feet, since our mucus is used internally. Aside from lubricating soft tissues, the mucus in our airways relies largely on its stickiness to capture dirt and pathogens, keeping them away from our lungs to avoid infection. As such, rather than being packed with nutrition, or directions to a friend’s house, they’re full of things your body is trying to prevent contact with.