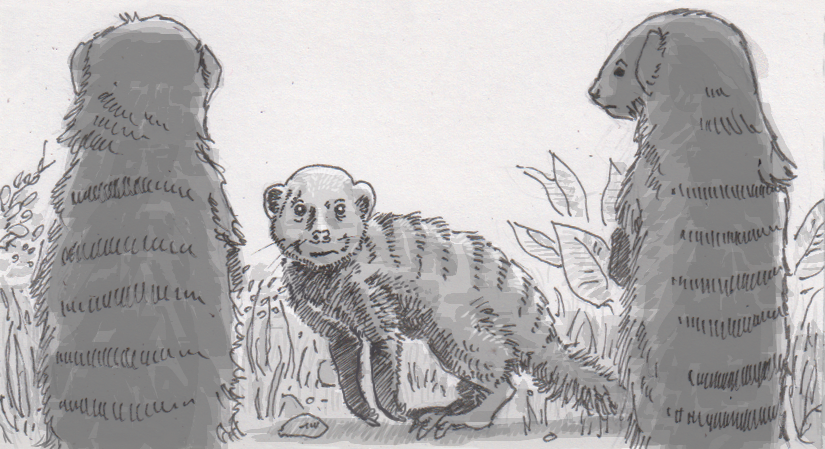 As some of the most antagonistic social animals in the world, it may seem counter-intuitive that banded mongooses elect to take care of each other’s kids all day. Instead of staying close to their own mother or father, a baby’s care is distributed between the adult members of the colony, relative and non-relative alike. This isn’t because banded mongooses are living some sort of cooperative, utopian dream though— it’s actually the concept of mutually assured destruction, applied to childcare.

Pups hiding from each other’s parents

There is a lot of tension in banded mongoose (Mungos mungo) colonies, stemming from limited resources and rigid hierarchies. Colonies are usually made up of multiple family units, with up to 40 members moving from burrow to burrow, often taking up residence in old termite mounds. It seems that this limited space and food compels adults to kill each other’s children, theoretically freeing up resources for their own offspring. Since adults easily pose a danger to pups, biology and behaviors have had to make considerable adjustments to keep the mongooses from wiping themselves out.

To survive the threat posed by neighbors, pups can’t be obviously tied to a specific mother. All the breeding females will give birth within a few days of each other, so all the babies in the colony are around the same age, making it harder to identify specific individuals. As much a mother supposed “knows her own,” mongoose pups try to stay anonymous among their cohort, lest they give an unrelated adult reason to attack them. Rather than give up on all the kids, all the adults pitch in, with females watching over females, and males watching the young males. Parents seem to show a bit more interest in watching everyone’s pups, but not enough to make it obvious who belongs to who.

As pups age, the kin/non-kin issue comes up again. Older females expecting new litters may feel that the burrow is too crowded, and try to free up space by throwing younger adults out. In this case, the tables turn, as mothers will specifically target their own female relatives and offspring for eviction. The reason isn’t that they can’t stand their own family, but that they expect that their family won’t fight back as hard. An unrelated mongoose might actually profit from killing the older female in a fight, but that female’s daughters (and sometimes sons) will be more reluctant to injure their own, and thus move out more peacefully.

So mongooses basically have families that only put them at risk. Attachment as a pup risks their own life, and as an adult nets them an eviction most likely from their own mother. Perhaps with a childhood like this, it’s no wonder these animals prefer to hunt alone.