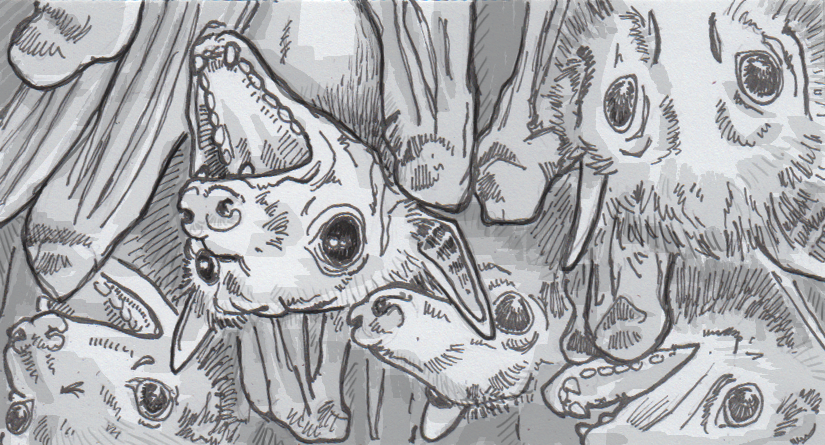 Bat conversations, and complaints, are in many ways comparable to our own

Recordings of bats have revealed that when roosting, the small, flying mammals seem to have a lot in common with my children towards the end of the winter holidays. With an amazing array of possible ideas and sounds to share, computer analysis has found that most of what bats share with each other are arguments and complaints. The similarities to kids (or let’s face it, plenty of adults) go even deeper, with signs that language acquisition and specificity also resemble how humans learn to talk (and gripe.)

To figure out what bats might be saying, a group of 22 Egyptian fruit bats (Rousettus aegyptiacus) were recorded while they roosted. The 75 days of recordings were then analyzed by a computer algorithm originally designed to parse human voices and speech. Once patterns were found, those sounds were then compared to video footage of what the vocalizing bats were up to when they piped up to see what stimuli they were reacting to.

What was found was a very relatable set of ‘conversations’ about which individuals were getting what, and whether their neighbors liked that or not. Food and sleeping arrangements were found to have specific vocalizations, as were complaints about unwanted advances from male bats. And because nature apparently likes to give parents a hard time no matter the species, bats were also found to have a specific call to complain about a neighbor “sitting too close.” Equally relatable is the fact that these gripes and demands weren’t generic broadcasts to the group, but were generally tailored and modified for specific, individual audiences.

Babbling before they can b*tch

Now that researchers have confirmed that other species have their own versions of “Mom, he won’t stop bugging me,” they now want to see how all this ‘speech’ develops. A separate study put a group of Egyptian fruit bat pups in isolation from their colony to see how their vocalizations might develop differently without adult feedback. As with human baby’s babbling and correcting themselves to better mimic the people around them, bats that grow up hearing adult vocalizations can ‘speak’ much more clearly at a younger age. The group that was denied the interactive feedback of “hey, that’s my food!” sounded like much more like babies as they grew up. Once they were exposed to normal adult bats, they were able to correct their vocalizations, but as with human speech it seems that some kind of interaction was required. Even, it seems, if that interaction was to lodge a complaint against their siblings or jostle for more room in the roost.