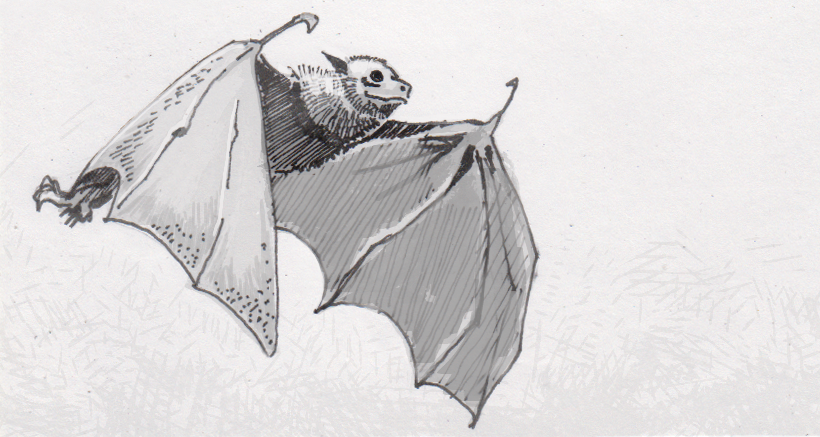 Bats adding a new twist to the concept of “compromised immune systems” The term usually refers to organisms that have weakened immune systems, and are at higher risk for infection as a result. Bats, on the other hand, seem to have taken the idea of “compromise” in a new direction, as their immune system has an unusual tolerance for viruses in order to benefit the bats. Not only do the bats seem to survive well enough with extra viruses in their bodies, but a dampened immune response may be a crucial component of their ability to fly.

The key to bats’ strange immune system are stimulators of interferon genes (STING). Humans, cats and dogs all have our own versions of STING, which allows our bodies to create interferon proteins, which help us fight off invasive viruses. Interferons are powerful, and if STING pathways are active when a virus isn’t present, an animal can face severe consequences in the form of an auto-immune disease. So while our STING pathways are triggered selectively, bats seem to take a very different approach, as their STING pathways are always on, but at a reduced degree of intensity.

This basically means that bats’ immune systems are always activated, but not at full power. As a result, many viruses from rabies to Ebola, can take up residence in a bat’s body, turning it into a viral reservoir. However, the bat seems to suffer no debilitating symptoms from those diseases, letting them be controlled without any dramatic immune reaction one way or another. Researchers describe this dynamic as a “balance” with the bats’ viral load, and as nice as being able to ignore a SARS virus sounds, dealing with pathogens was probably only a happy byproduct of another evolutionary pressure.

It’s suspected that the reason bats needed a constant but dampened STING pathway was to deal with self-inflicted metabolic damage to cells. The energetic demands of flight can cause some DNA to be released into cells, outside the cell nucleus where it belongs. In most mammals, those DNA fragments would be activate STING pathways to produce interferons, leading to a big immune reaction. Since bats need to fly on a daily basis, this arrangement would be problematic. By altering the sensitivity of their interferon reactions, bats were able to cope with these metabolic demands without freaking out their immune systems. Safely harboring viruses then made sense, since their immune systems were already functioning on different level of activity than other mammals.

My five-year-old asked: So do the bats that help farmers have lots of viruses?

Since the STING dampening probably first evolved to enable flight, it’s safe to assume this compromising immune response is present in all bats. Many of the viruses these bats may be carrying require direct contact of some kind, such as with an infected bat’s saliva, so as long as people aren’t handling the animals, there’s not too much risk there. However, bats are more likely to transmit a virus to a domesticated animal, so it’s good to try to inoculate livestock against viruses like rabies whenever possible.