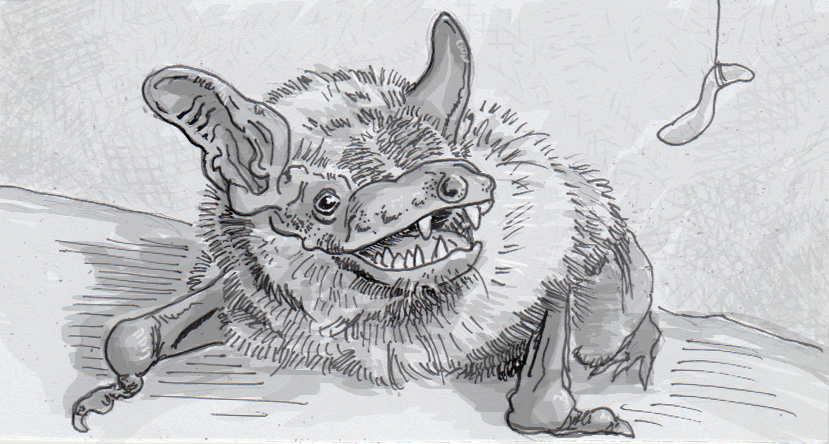 Sometimes the information you can get from having two ears just isn’t enough. Sure, your brain can pick up on the minuscule differences in how one ear hears a sound compared to the other, helping you map out the source of that sound, but if you really want to make a sound out, you might have to do a bit of wiggling. Many creatures can wiggle their ears some, but even big-eared brown bats (Myotis lucifugus) will actually go as far as tilting their head at the moment a sound arrives. The tilt, which humans, cats and dogs will do as well, isn’t about better aligning the ears as much as the movement itself, since it basically allows your ear to get more points of reference over time about the single, incoming sound.

Tuning in with a turn of the head

This makes a lots of sense for animals like bats that depend on sound to locate their dinner each night. However, researchers had long overlooked it in formal studies of their high-pitched vocalizations, since bats were often immobilized when their squeaks were being recorded and studied, cutting down on the number of variables at a given moment. A casual observation by Melville Wohlgmuth at Johns Hopkins University one day prompted further exploration into how and why bats move their heads, revealing some twitches were nearly undetectable by the naked eye.

To test the bats’ movement, Wohlgmuth had to design a special rig to observe the small mammals while giving them some range of motion. Nestled in a small enclosure with an open side, the bats had mealworms carried towards them on a fishing line, requiring that they use their echolocation to track the moving target as it approached their face. Their heads and ears were marked with reflective tape that could then be tracked by a high speed camera, similar to motion capture techniques used in special effects. As predicted, the bats would throw in a head waggle when more spatial information became necessary, such as when the mealworm changed direction suddenly. The bats’ ears twitched in tandem with each squeak, synced to milliseconds apart and increasing the bats’ targeting accuracy.

If these motions weren’t enough, a separate study had previously found that horseshoe bats (Vespertilio ferrum-equinum) will not just move, but alter the shape of their ears when listening for their reflected squeaks. The different shapes would allow the bats to better detect specific frequencies of sound, and flexing in tandem with the bats’ ultrasonic vocalizations. High-speed, stereo vision cameras were required to detect the full extent of these movements, which can literally be completed faster than the blink of an eye.

Source: Kill them with cuteness: The adorable thing bats do to catch prey, Phys.org