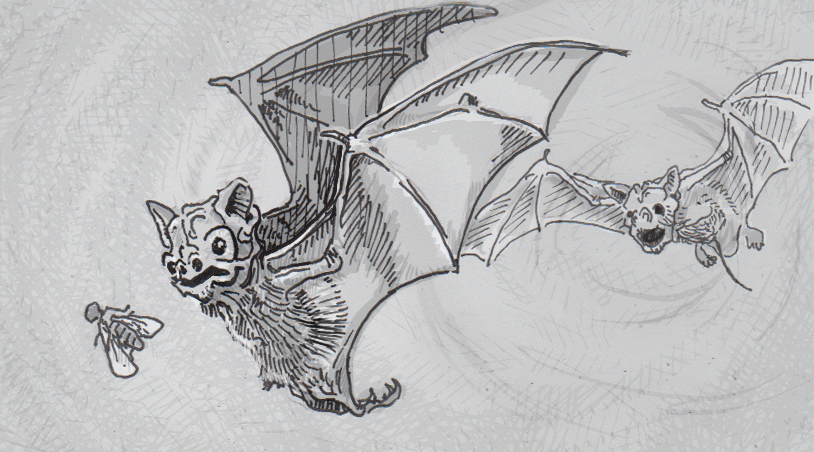 The last thing many insects experience in their life is a sudden, ultrasonic pulse of sound. Called the “feeding buzz,” this is the sound a bat makes to pinpoint the insect’s location, just before the bat swoops in to take a bite. However, sometimes a second buzz might be heard, in which case the insect may find itself spared from becoming dinner. The reprieve is most likely short-lived though, as the bug’s savior was most likely planning on eating it itself.

The back and forth buzzing above is a scenario that has been studied in Mexican free-tailed bats. The bats have a variety of calls, and are capable of adjusting their frequencies to avoid conflicting with each other’s echolocation. However, that same precise control over sound can be used competitively as well, as the bats were sometimes observed making last second buzzes towards peers who were about to grab an insect to eat. The additional sound confused the first bat’s echolocation, almost like having a bright light shined in your eyes when you’re reaching for something. After that feeding buzz was disrupted, the interfering bat would often try to grab the insect for itself, seemingly stealing the meal, and providing a bit of motive behind this behavior.

The technique seems fairly effective. In 145 recorded attacks, bats who had their feeding buzz jammed caught their prey just 14% of the time, down from the normal success rate of 30%. To make sure there weren’t other intra-bat factors at play here, researchers also tested bats that were only disrupted by a recording of a jamming buzz, yielding similar results. In this way they isolated the sound’s role in the hunter’s targeting, rather than some other influence from having a second bat nearby.

This doesn’t mean all bats are constantly harassing each other though. Similar calls have been heard in various species, but it sometimes seems to be tied to more cooperative behavior. Rather than a last second barrage of interference, the other explanation for close-range buzzing might just be bats calling dibs on specific insects. They may in fact be calling specific bugs as theirs to avoid two hunters targeting the same moth, but further tests are needed to confirm this one way or the other.