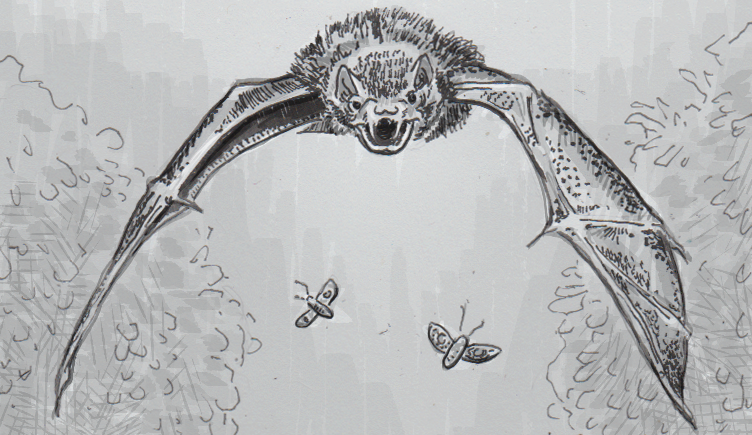 If you’re reading this, odds are you didn’t catch your latest meal. Much less catch it in mid-air, in the dark, while it avoided you and your high pitched shrieks to try to find that particular roll or cutlet. Bats, on the other hand, do this over and over each night, sometimes catching multiple parts of their nightly meals in under a second. While we have an idea about many of their feeding techniques, researchers were intrigued by this speed and efficiency, and so they wanted to plot out just how these bats seemed to hunt multiple targets at once.

Initial observations found seemed to show that the Japanese house bats (Pipistrellus abramus)were actively tracking multiple bugs simultaneously, but it was unclear exactly how that might work. Recordings of bats’ shrieks indicated that their echolocation was effectively tracking two bugs at a time, rather than relaying the location of the closest insect alone. It seemed likely that by keeping an eye (or ear? or shriek?) on more than one bug at a time, the bats could hunt more efficiently, capturing more bugs per strike.

To start to test this possibility, the research team tried plotting out multiple mathematical models to see how the bats might be approaching this problem. It showed that the bat would likely aim for one bug and make a small adjustment to catch the second, or that a curved path would allow both targets to be eaten in quick succession. With this model in mind, the researchers then recorded over 800 more bat strikes, with audio data of their echolocation from multiple positions to really establish a three-dimensional audio landscape. They found that whenever a bat successfully snatched two insects in a row, they had indeed started tracking both targets with their shrieks before their attack. Like a (not so great) chess player, they were plotting at least two moves ahead.

This sophistication is likely the bats’ limit though. The scientists believe that the bats could detect and be aware of at least three targets at once, actually plotting a course to catch all three would be too difficult. There’s a single spatial relationship between two bugs, even if they’re moving, but a third moving target adds a lot more complication if you’re trying to swoop in and grab them all at once. And maybe this way the bats have time to chew their food a little too.