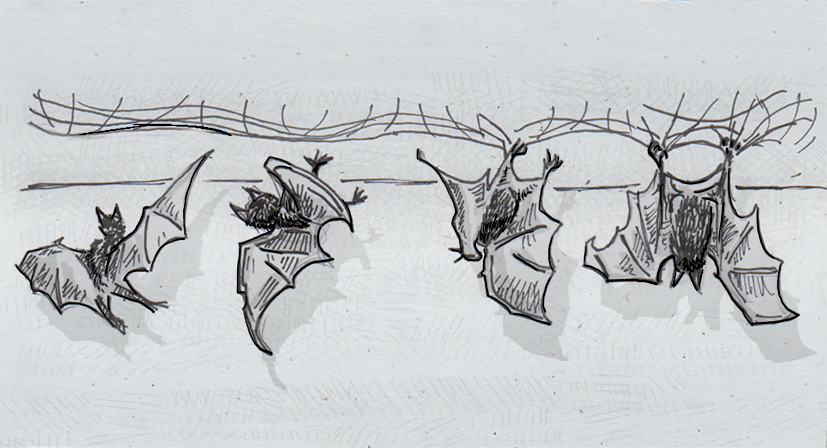 Bats invert themselves by bending their inertia

Researchers are hesitant to say it, but it’s clear that they’ve just confirmed that bats are basically flying ninjas. While investigating the mystery of how bats fly to invert themselves when perching upside down, they discovered that the bats aren’t solving this problem with their wings at all. Instead, the flying mammals simply get in range before flipping themselves at the ceiling in a move that’s more gymnastics than aeronautics.

Like a good ninja, the bats didn’t make these maneuvers easy to observe with the naked eye. The entire operation is completed less than a second, meaning the research team at Brown University needed to deploy high speed cameras to record exactly how the bats, Seba’s short-tailed bats (Carollia perspicillata) in this case, were moving. They then used that video footage to model the bats as 3d simulations, better tracking shifts in momentum and anatomy.

The landing was revealed to be based on controlling inertia more than flight. The bat first approached the landing surface, slowing down and aligning itself perpendicular to the ceiling. It then tucked it’s left wing in, followed by a last flap to initiate a pitch forward like a somersault or mid-air flip in a video game. As it rolled forward, the bat reached its wings forward to increase momentum, just like a dancer or figure-skater reaches with their arms in the direction of spin. When successfully inverted, the bat grabbed the ceiling to complete the landing.

While the researchers were surprised at the lack of aerodynamic concerns in this movement, it may be tied to just how a bat’s wing evolved. While both bird and bat wings convergently evolved to be attached to their forelimbs, the similarities nearly end there. Birds have stiffer wings with light, hollow bones, with feathers conducive to soaring. Bat wings, on the other hand, have many dense bones, with flimsy wing membranes draped between their digits. This lack of aeronautic lift may be why bats have evolved a more acrobatic solution to their landing problem.