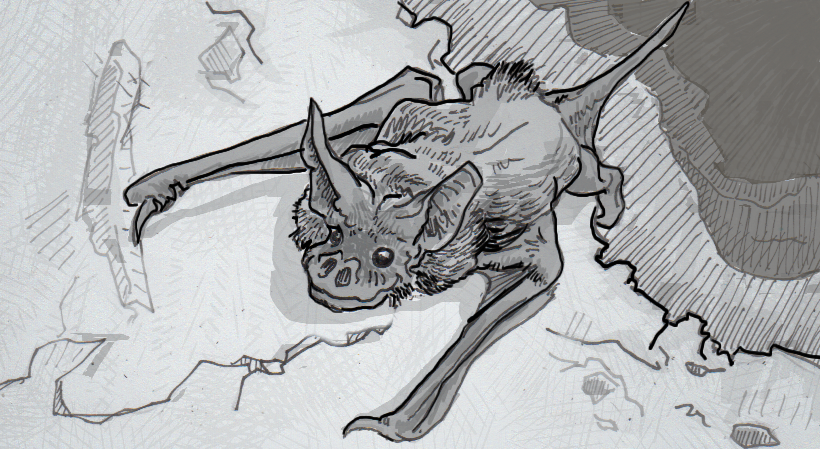 Food chains, in one way or another, can generally be traced back to energy from the sun. Weather an organism lives on land or in the sea, somewhere in its diet’s history, energy was gathered from the sun and then consumed by something else. So how does this work for troglobites? These animals live only in caves, often much deeper than sunlight has any chance of reaching, so what is renewing their supply of food and nutrients? If they’re lucky, it gets delivered by roosting bats, who are kind enough to deposit it… splatted all over the cave floor.

Cave-bound troglobites not only live exclusively in caves, but they’re highly adapted to dark, cold environments. With specializations like translucent skin, missing eyes and acute hearing or smell, these animals have found a way to spend their entire lifetime underground. To save energy, these animals aren’t terribly active, since they’re often forced to rely on something like a small stream to carry in new bacteria, bugs or rotting material as food. Beyond that, they literally can’t leave the cave for more nourishment as they’re just not built to stand up to life on the surface.

Fortunately for troglobites, there are trogloxenes in the world. Trogloxenes are animals that live outside, but make temporary shelter in caves. This includes bears, some lizards, and of course, bats. Bats, especially in winter when they need more shelter, are a troglobite’s best friend, as their voracious consumption of plants, bugs and even blood can provide a massive infusion of nutrients in the form of their guano. As the bats roost, their poop essentially seeds the cave floor with all kinds of digested materials, which then become food for the other critters living there.

The most extreme example is likely the Bracken Cave in Texas, where 20 million Mexican free-tailed bats (Tadarida brasiliensis) regularly roost. Thousands of years of summer visits have created guano piles estimated to be 59 feet deep, which attracts bacteria and insects ranging from ants to flesh-eating beetles. That kind activity makes provides food for larger creatures, from crayfish to other seasonal visitors, such as the Caucasian parsley frog (Pelodytes caucasicus) found in Turkey, Georgia and Russia. While the specific natives of caves are often local only to that cave, thanks to their geographic isolation, it’s interesting to see how bats can play a reoccurring, and critical, role in all these ecosystems.

Source: Give us guano or give us death by Jason Bittel, on Earth