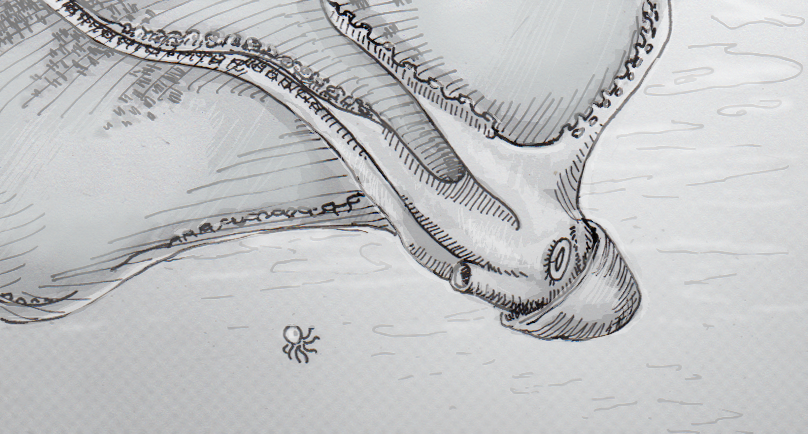 Members of the genus Tremoctopus are commonly known as blanket octopuses, thanks to a webbing of skin between four of their arms that can trail the animal like a blanket or scarf. However, once you see the animal in action, it almost seems that ‘caped’ octopus would be a better name, as the skin webbing can be unfurled on demand, allowing the cephalopod to quickly transform it’s profile into something nearly super-heroic. While it doesn’t don this look to fight crime, the genus does have enough specialized traits (even among octopuses!) that it deserves a more impressive name than something associated with your linen closet.

The skin blanket, or cape as I will henceforth refer to it, can stretch well beyond the animal’s already impressive six foot length. It is generally deployed in the face of danger, to intimidate or at least confuse a would be predator. If that predator isn’t sufficiently impressed by the cape, it can be separated from the octopus itself as a decoy, similarly to how a lizard can purposely self-amputate its tail to avoid being caught. This is all made necessary because members of Tremoctopus don’t eject ink at predators, and they live in the open sea without rocks to provide shelter or camouflage opportunities.

Armed with other creatures’ arms

However, these tactics are all thrown out the window for capeless male and immature female blanket octopuses. The smaller cephalopods don’t have an awesome cape for intimidation or defense, and instead rely on stolen tentacles from Portuguese man o’wars to be used as weapons. The normally painful or even dangerous venom of the man o’war has no effect on blanket octopuses, and so the stinging appendages can be wielded against prey and would-be predators.

While the capes and clever weapons may make this genus seem like the Batman of the seas, I’d be remiss if I didn’t also compare Tremoctopus to Ant-Man as well. This is thanks to the females’ six foot length being 10,000 times larger than their two inch male counterparts. This rather extreme sexual dimorphism is possible because the male blanket octopus only needs to live long enough to deliver sperm to the female once. This is accomplished with a specialized arm that is loaded with sperm, called a hectocotylus, which the male attaches to the female, leaving him do die afterwards. The female then carries the arm with her until she is ready to fertilize her eggs, at which point she chooses one of the potentially multiple arms that have been given to her by various males. So between the self-sacrifice and tiny size, it seems that the males are the sidekicks of the genus at best.

My kindergartner asked: What do blanket octopuses eat? They snack on crabs, other molluscs, crayfish, scallops, snails, etc.

Does the male need its sperm to survive? Why does it die instead of grow another hectocotylus since the female can grow a new cape? Aside from the injury of losing the appendage, this is probably a case of a system that evolved to be good enough, instead of what might seem optimal to us. The male’s DNA does get passed along this way, possibly with greater success than if he also had to use resources to regenerate and/or grow a body that could survive and defend itself. A number of different animals have tiny males who operate on principal of being a minimally efficient sperm delivery systems, often at their own expense.