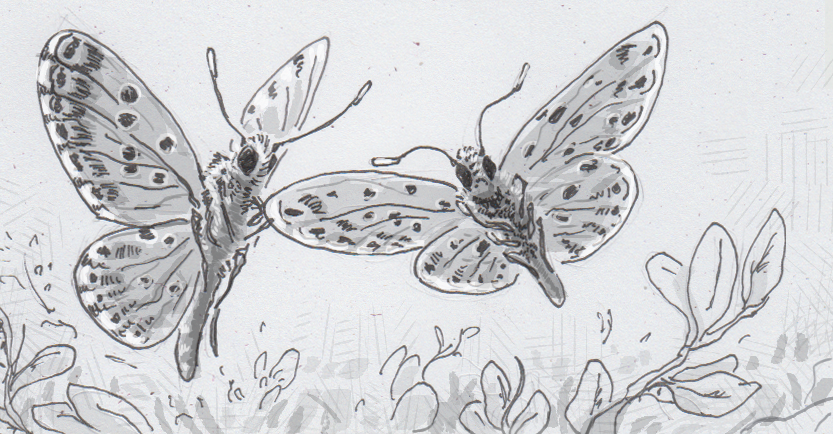 Butterfly wings are amazing, sophisticated structures that not only allow the insects to fly across continents, but also to communicate with the outside world. Eye spots startle predators, while intense colors warn them of potential poisoning. In some species, bright coloration may also play a role in sex identification, with male butterflies sporting brighter, more vivid hues on their wings. That’s a lot to keep an eye one, especially when there is a lot of fluttering involved, which may have created some room for confusion. It seems that male butterflies may be aggressively pursuing each other, baffled why their expected mate isn’t cooperating more.

Many male animals fight each other to assert dominance over territory or possible mates. However, species that engage in such contents often show some investment in a way to clearly establish a victor, such as the horns on rhinoceros beetles that are used to various forms of combat. Even animals that don’t necessarily wound their opponents at least have clear rules of engagement, which is what made the ‘battles’ of male butterflies so perplexing. Without any way to injure each other, butterflies simply fly and posture until one gives up from exhaustion. Considering that adult butterflies often live only two weeks, giving up large swaths of time to wear down an opponent seems especially costly. Even the less dominant male would probably be better off cutting their loses by looking elsewhere to find a mate.

Unless, of course, they thought they had found a mate. Looking closely at supposed butterfly battles, Tsuyoshi Takeuchi from Osaka Prefecture University in Japan found some patterns that suggest the butterflies were vigorously trying to impress a butterfly they thought was a mate. Extended aerial ‘fights’ only occurred when two males encountered each other in flight, and thus couldn’t get a good look at each other. Males sitting near each other never seemed motivated to fight for dominance, and even males sitting near a female remained calm, even though that would seem like the prime scenario for securing a mate. The remaining hypothesis is that the ‘fighting’ males each think they are dealing with an interested but confusingly coy mate, which is likely a scenario worth exhausting oneself for.

It might seem like one of the key features of sexual dimorphism is to help identify males and females of a species, but it’s not necessarily foolproof. Aside from the fact that the degree of dimorphism varies by individual, the fact that male butterflies are generally more brightly colored may not be enough of sign for these guys to pick up on. Blue morpho butterflies (Morpho peleides), for instance, have been found to be attracted to butterfly-sized blue foil waving in the air, so the initial mate selection process clearly leaves room for error. However, since most butterfly courtship also involves other, more controllable cues, like smells and specific body language, it’s a bit odd that these ‘battling’ males don’t realize their date isn’t going well earlier in the process.